2 - Indianapolis Colts (last week 2...they played very well on Monday night, but I don't think they can get past San Diego)

5 - New England Patriots (last week 5...Brady, the most successful QB of the 21st century, was ROBBED of a trip to the Pro Bowl)

6 - New Orleans Saints (last week 4...still second best in the NFC...Drew Brees is the only challenge LT has for MVP, and Coach Payton is clearly Coach of the Year)

9 - Dallas Cowboys (last week 9...TO should be banned from the NFL)

10 - Philadelphia Eagles (last week unranked...Coach Reid and QB Garcia are doing a TREMENDOUS job of keeping them in the mix since McNabb's injury) 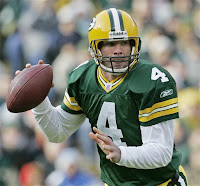 Gold stars to:
San Francisco 49ers and Tennessee Titans...two teams whose good coaches are keeping them from the league basement

Hat tip to:
Brett Favre of the Green Bay Packers...quite possibly the toughest man ever to play team sports, and certainly one of the most entertaining athletes to watch, I hope he plays at least one more season
at 2:19 PM