"...as they were watching, he was lifted up, and a cloud took him out of their sight. While he was going and they were gazing up toward heaven, suddenly two men in white robes stood by them. They said, 'Men of Galilee, why do you stand looking up toward heaven? This Jesus, who has been taken up from you into heaven, will come in the same way as you saw him go into heaven.'" 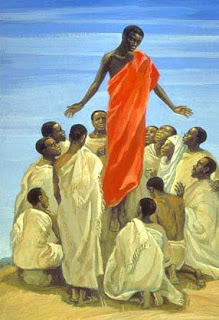 is Ascension Day...the day on which we remember the "Ascension of the Lord". This Sunday, Christians all over the globe will be remembering this important event (if you're choosing to ignore it, then shame on you!). This event is a crucial theological event that pastors need to talk about and need to address, particularly in today's postmodern environment.

Too often, we get caught up in the idea of Jesus going "up", knowing that as one rises through the atmosphere, one reaches not the otherworldly realm of the Almighty, but Earth's orbit and, eventually, deep space. We must remember that the writer of Acts, as with all the early disciples, were trying to describe something which happened before them which was difficult for them (and us) to understand, using the vocabulary they had, and working out of the worldview they maintained.

In N.T. Wright's fascinating book, Surprised By Hope, he deals extensively with the notion of Jesus' Ascension. Bishop Wright describes heaven - the place to which Jesus "ascended" - not as a place far above in the sky, but rather as another dimension of God's creation, which exists concurrently with earth. He (brilliantly) compares it to C.S. Lewis' Narnia, which is distinct from our world yet only a wardrobe away.

The Church believes that Jesus is seated at the right hand of the Father, and affirms this each Sunday in the Creed. Given Bishop Wright's understanding, this means that Jesus is very present with us now, though he is distinctly somewhere else. This says wonderful things about the absolute Lordship of Christ.

More than this, however, the fact that Jesus is now in heaven and not on earth reminds us that he will return on the Day of the Lord. We read on page 117 of Bishop Wright's book,

"At no point in the Gospels or Acts does anyone say anything remotely like, 'Jesus has gone into heaven, so let’s be sure we can follow him.' They say, rather, 'Jesus is in heaven, ruling the whole world, and he will one day return to make that rule complete'."

So, the Ascension strengthens not only our understanding of the Lordship of Christ (a strengthening which is greatly needed in today's Church), it also reminds us that our eternity will be spent not "in heaven" as disembodied spirits flying around the clouds (a la "I'll Fly Away"), but rather in the New Jerusalem on the New Earth, as transformed and embodied children of the living God, a concept sadly forgotten by many Christians, but a concept which has incredibly far reaching implications, theologically, practically, missionally, politically and socially.

So, my prayer is that the Church is blessed this Ascension Day, and that pastors and congregations across the planet ponder these issues and rejoice in the hope of glory!

Rerun: The Ascension of Jesus

"He said to them, 'This is what I told you while I was still with you: Everything must be fulfilled that is written about me in the Law of Moses, the Prophets and the Psalms.' Then he opened their minds so they could understand the Scriptures.

told them, 'This is what is written: The Messiah will suffer and rise from the dead on the third day, and repentance for the forgiveness of sins will be preached in his name to all nations, beginning at Jerusalem. You are witnesses of these things. I am going to send you what my Father has promised; but stay in the city until you have been clothed with power from on high.'

"When he had led them out to the vicinity of Bethany, he lifted up his hands and blessed them. While he was blessing them, he left them and was taken up into heaven. Then they worshiped him and returned to Jerusalem with great joy. And they stayed continually at the temple, praising God."

- Luke 24:44-53 (TNIV)
I think that the Ascension of Our Lord might be the final act in God's narrative of the redemption of humankind (with Pentecost and the parousia being a glorious epilogue). I truly wish that we made a bigger deal out of this almost-forgotten holy day.

Luke's account of the Ascension (often forgotten in favor of the account in Acts 1) is a tremendously powerful passage. It presents a summary of the Passion and Easter, going on to commission the disciples for ministry, giving the promise of the Spirit's power. The skeleton of the gospel is encapsulated in a few verses!

Finally, after blessing his disciples, Jesus is "taken up into heaven". To be honest, this sounds very antiquated to me. After all, while the Biblical writers operated out of a pre-modern "three-tiered universe" understanding, we know that if one goes up, up, up into the sky, they'll arrive not in the Throne Room of Heaven, but in orbit and, eventually, deep space.

But we ought not allow ourselves to become too sidetracked with physics, which most pastors don't understand anyway (myself included). Instead, I'm intrigued by the language the Gospel writer used to describe this bizarre event. To describe the idea that Jesus was "taken up", Luke used the Greek word anaphero, which certainly does mean "to be taken up or lifted up to a higher place".

It's an interesting word, wonderfully rich in 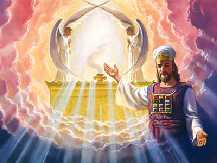 depth of meaning. Anaphero, as it happens, was also used to mean "to offer a sacrifice on the altar".

Look at these other New Testament usages of the word:

"Unlike the other high priests, he does not need to offer sacrifices day after day, first for his own sins, and then for the sins of the people. He sacrificed for their sins once for all when he offered himself." - Hebrews 7:27

"...Christ was sacrificed once to take away the sins of many; and he will appear a second time, not to bear sin, but to bring salvation to those who are waiting for him." - Hebrews 9:28

"Was not our father Abraham considered righteous for what he did when he offered his son Isaac on the altar?" - James 2:21

In fact, one of the primary themes of the book of Hebrews concerns the motif that Jesus had to ascend to Heaven after his suffering, death, and Resurrection in order to take his place in the Throne Room, where he serves as the Great High Priest and mediates on our behalf...

"Christ did not enter a sanctuary made with human hands that was only a copy of the true one; he entered heaven itself, now to appear for us in God's presence. Nor did he enter heaven to offer himself again and again, the way the high priest enters the Most Holy Place every year with blood that is not his own. Otherwise Christ would have had to suffer many times since the creation of the world. But he has appeared once for all at the culmination of the ages to do away with sin by the sacrifice of himself." - Hebrews 9:24-26 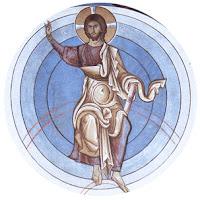 metaphorical language? Perhaps. But it is powerful language, filled with an astoundingly imperative truth...Jesus' priestly role. I'm not sure evangelicals deal with this particular role of Our Lord particularly well. We love to talk about the Prophet who challenged (and still threatens) the status quo; we are quite fond of the King whose sovereignty we proclaim as absolute in a relativistic world.

But the Priest? That's a mite too Roman for many of us. What's next...Mary? Many evangelical pastors aren't even clear as to what this priestly role is all about.

But the Ascension gives us an opportunity to ponder this aspect of Our Lord's continuing ministry. Jesus, who was the perfect, unblemished sacrifice, ascended to become the Great High Priest who proclaims absolution from the Throne Room of Heaven, seated at the right hand of the Father (a position of honor and authority). This makes the Ascension a crucial part of the redemption story, and something we need to address and celebrate in the Church.
at 7:57 AM No comments:

Of all the many videos available about the upcoming proposals, I appreciate this most, because it comes from the African perspective, which we desperately need to hear.

Haven't updated in a while; hope to get to it soon.