The Cost of Proclaiming the Gospel

A reminder that Jesus and his gospel are offensive even to many religious people:

"Jesus,
filled with the power of the Spirit,
returned to Galilee,
and a report about him spread through all the surrounding country. 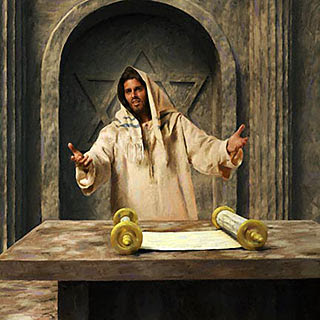 He began to teach
in their synagogues
and was praised by everyone.

When he came to Nazareth,
where he had been brought up,
he went to the synagogue
on the sabbath day,
as was his custom.
He stood up to read,
and the scroll of
the prophet Isaiah
was given to him.
He unrolled the scroll
and found the place
where it was written:


'The Spirit of the Lord is upon me,
because he has anointed me to bring good news to the poor.
He has sent me to proclaim release to the captives
and recovery of sight to the blind,
to let the oppressed go free,
to proclaim the year of the Lord's favor.'

And he rolled up the scroll, gave it back to the attendant, and sat down.
The eyes of all in the synagogue were fixed on him.
Then he began to say to them,
'Today, in your hearing, this scripture is fulfilled.'

All spoke well of him and were amazed at the gracious words
that came from his mouth.
They said, 'Is not this Joseph's son?'

He said to them,
'Doubtless you will quote to me this proverb:
Doctor, cure yourself!
And you will say,
Do here also in your hometown
the things that we have heard you did at Capernaum.'

And he said, 'Truly I tell you, no prophet is accepted in the prophet's hometown.
But the truth is,
there were many widows in Israel in the time of Elijah,
when the heaven was shut up three years and six months,
and there was a severe famine over all the land;
yet Elijah was sent to none of them except to a widow at Zarephath in Sidon.
There were also many lepers in Israel in the time of the prophet Elisha,
and none of them was cleansed except Naaman the Syrian.'

When they heard this, all in the synagogue were filled with rage.
They got up, drove him out of the town,
and led him to the brow of the hill on which their town was built,
so that they might hurl him off the cliff.
But he passed through the midst of them and went on his way."

In the days since the Supreme Court of the United States rendered its decision in the Obergefell v. Hodges case which has made same gender marriage legal in all 50 states, there have been various reactions from Church leaders. Notably gracious responses were lodged by the Wesleyan Church, the Church of the Nazarene, the Anglican Church in North America, and the President of the U.S. Conference of Catholic Bishops. These thoughtful responses have much to teach the Body of Christ in these trying times.

Several United Methodist Bishops have also released statements. Some, such as that of Bishop Lindsey Davis of the Kentucky and Red Bird Conferences, are brief and serve as effective reminders of our commitment to the vows we have taken before Almighty God.

Other United Methodist Bishops have responded in ways that are less than satisfactory. Several episcopal leaders have issued statements urging pastors, laity, and local congregations to remain faithful to our covenant while offering loopholes that might enable us to avoid prosecution while still affirming practices contrary to Church teaching. Heartbreakingly, many of these sad statements come not solely from Bishops in the Northeast, North Central or Western Jurisdictions, which have histories of unfaithfulness to our covenant, but from episcopal leaders in the Southeast and South Central Jurisdictions, such as Bishop Bill McAlilly of the Memphis & Tennessee Conferences, Bishop Mike Lowry of the Central Texas Conference, and Bishop Gary Mueller of the Arkansas Conference.

Bishops are called according to Chapter Three of our Book of Discipline - 2012, "...to guard the faith, order, liturgy, doctrine and discipline of the Church." They are to lead, "...using scripture, spiritual disciplines, our Wesleyan heritage, and the history and doctrines of our Church" (emphasis mine). They are to, "...teach and uphold the theological traditions of The United Methodist Church." In my view, they are to embody our covenant, that clergy and laity have faithful examples to hold before the Church and the world.

If a Bishop (or a pastor, frankly) cannot support, proclaim and live into the teaching of The United Methodist Church, there is no shame in stepping away from the clergy role. To continue in a key leadership role (such as that of a Bishop) while being unable or unwilling to embody our covenant (as defined by the General Conference and outlined in our Discipline) is shameful.

What would a Church look like if Bishops stated, "Here is the teaching of the Church; here is why we believe this to be correct; here is how disciples of Jesus live into this teaching"? Instead, we have Bishops essentially ignoring their teaching office, saying, "Here is how you can 'get around' Church teaching while avoiding any legal ramifications." That, in my opinion, is nothing less than episcopal malfeasance and is unworthy of the episcopal office.

Almighty and everlasting Father,
you have given the Holy Spirit to abide with us forever:
Bless, I pray, with the Spirit's grace and presence,
the Bishops of The United Methodist Church,
that they would grow in faith and wisdom
and lead your people with faithfulness,
that your Church,
being preserved in true faith and godly discipline,
may fulfill all the mind of him who loved her
and gave himself for her,
your Son Jesus Christ our Savior;
who lives and reigns with you,
in the unity of the Holy Spirit,
one God, now and forever. Amen.
at 9:09 AM No comments: