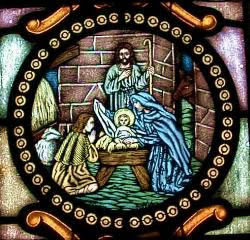 and without him not one thing came into being. What has come into being in him was life, and the life was the light of all people.
The light shines in the darkness, and the darkness did not overcome it...
He was in the world, and the world came into being through him; yet the world did not know him.
He came to what was his own, and his own people did not accept him.
But to all who received him, who believed in his name, he gave power to become children of God,
who were born, not of blood or of the will of the flesh or of the will of man, but of God.
And the Word became flesh and lived among us, and we have seen his glory, the glory as of a father's only son, full of grace and truth."
- John 1:1-5, 10-14 (NRSV)

Merry Christmas, McIlwains! I'm at mom's right now, and trying to use her modem connection is driving me crazy.

I searched on this blog for your phone number or an email address, but this was the easiest to find.

I've had to cut the vacation a day short, work is calling and I can't ignore it right now, so I can't make it around this time. I'm leaving for home Tuesday and once I get home I'll try to give you a call.

Talk to you soon.