This week in 1784, Methodist preachers in America met at Lovely Lane Chapel in Baltimore at the now famous "Christmas Conference". Francis Asbury wrote 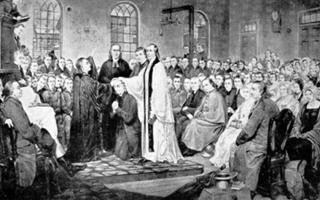 "Friday, December 24, 1784: ...[I]t was agreed to form ourselves into an Episcopal Church, and to have superintendents, elders, and deacons. When the conference was seated, Dr. Coke and myself were unanimously elected to the superintendency of the Church, and my ordination followed ...We spent the whole week in conference, debating freely, and determining all things by a majority of votes... We were in great haste, and did much business in a little time."

Thomas Coke, already ordained in the Church of England, had been previously consecrated to the "superintendency" by John Wesley. Under the leadership of Bishop Coke and (especially) Bishop Asbury, American Methodism grew to become the largest religious movement in the United States, a role it lost in the twentieth century.

Christmas is thus an especially important holiday for American Methodists, since we celebrate not only the birth of Our Lord, but also the formalization of Methodist organization in the United States.

Theologically, there is much to be discussed concerning the ordinations which took place in Baltimore two hundred twenty-two years ago. Were these ordinations and Asbury's consecration valid? Was "apostolic succession" broken, and does that matter?

Here are some interesting resources regarding apostolic succession in American Methodism...

Using these two pieces of information, an ordained United Methodist pastor can trace his or her ordination through Asbury, Coke, and Wesley and back to the apostles.