I Believe in Santa Claus

In the month of December,

much is focused upon one of the biggest superstars in our culture. I'm not talking about Elvis Presley, the Beatles, John Wayne, or Joe Montana; there is at least one superstar bigger than even those talented folks...Santa Claus.

Each year, images of Santa are everywhere...in our music, in our stores, on our televisions...everywhere. This doesn't bother me in the least; after all, Santa Claus is very real, and, if we remember who this man is, we should be more thankful for him and his ministry, which continues to touch people today with the love and peace of Christ.

"Santa Claus" is the Anglicized/Americanized name of Nicholas, a fourth century bishop

in what is today referred to as the Eastern Orthodox Church, in what is now the nation of Turkey. Known for his great generosity and prayerful devotion to the Scriptures, he was at one point imprisoned for his faith, but was eventually freed and participated in the critical Council of Nicea, which did so much to define, by the leading of the Holy Spirit, what entailed Christian orthodoxy.

It upsets me when I hear Christian sisters and brothers making the claim that Santa Claus doesn't exist. Imagine if in six centuries people claimed you never existed! Just because someone lived a long time ago doesn't mean they are fictional.

This is upsetting for a few reasons. First, Jesus had a special place in his heart for little children (Mt 19:13-25), and to hurt a child by claiming that Santa isn't real is not very Christ-like (see also Lk 17:2).

Second, human beings need fairy tales...we need to hold onto a sense of the fantastic. I posted briefly about this subject in May 2006, and it is a firm truth. To quote G.K. Chesterton, "Fairy tales are more than true - not because they tell us that dragons exist, but because they tell us that dragons can be beaten." We need this important concept, because the notion that "dragons can be beaten" is crucial to an understanding of the Christian faith; Jesus proclaimed an extremely powerful apocalyptic message (I refer you to Dale Allison's 1999 book on the subject). For a Christian to deny Santa's existence because his story is fantastic and filled with magic is to risk denial (for the same reasons) some pretty important aspects of the gospel which are also fantastic...such as the virginal conception and the Resurrection of Our Lord.

Third, and perhaps most importantly, we believe that disciples of Jesus Christ have a future (Jer 29:11), that death is not the last word (1 Cor 15:54-57; 1 Thess 4:14-18). We believe that in some way as yet not perfectly known, the dead in Christ are with God (I'll leave it to others to argue about the specific nature of the "intermediate state"). If we believe that, then is Santa Claus - Bishop Nicholas - with the Lord? If not, then are Grandma, Aunt Bessie, and your old Sunday School teacher with the Lord? John Wesley? Mother Teresa? Saint Paul? 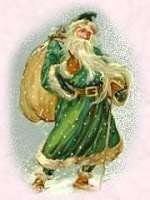 And, in the bosom of the Father, he is very much alive.

He stands today as he did centuries ago as a disciple of Jesus Christ committed to prayer, the Holy Scriptures, and (remember Nicea?) Christian orthodoxy.

He stands today as he did centuries ago as a disciple of Jesus Christ committed to remaining faithful to God, even at the risk of suffering and persecution.

He stands today as he did centuries ago as a disciple of Jesus Christ committed to standing with those who suffer, those who hurt..."the least of these".

He stands today as he did centuries ago as a disciple of Jesus Christ committed to sacrificial giving and sharing, both materially and spiritually.

Let us thank God for Santa Claus and his ministry, which continues to touch the world and inspire the Church; and let us use his example to inspire us to be more faithful as disciples of Our Lord Jesus Christ.

Thank you for your thoughts!

I guess the thing that bothers me about the images of Santa isn't Santa Claus himself, but what he has come to stand for in our society. In many ways, he's become the posterboy for materialism, and people today don't understand him in a Christian context.

I certainly think that Santa Claus exists in all the ways you mention. I think it is our job to educate the culture as to the true meaning of who Santa Claus is.

Nice. I'm showing this to my eight-year old who just discovered that "santa's not real". Thanks.

Beth had a professor in college who did a study to see how children's ideas of God were affected when they learned that Santa didn't exist. It was overwhemling that kids had a difficult believing in God after learning that Santa Claus wasn't real! I'm sure that it would help immensely to teach our kids about the real Saint Nic!

Two boys were walking home from Sunday school after hearing a strong preaching on the devil. One said to the other, "What do you think about all this Satan stuff?" The other boy replied, "Well, you know how Santa Claus turned out. It's probably just your Dad."

Excellent post! All of that is why CS Lewis included Santa in the Chronicles of Narnia: Because he's a servant and harbinger of the True King, Jesus Christ.