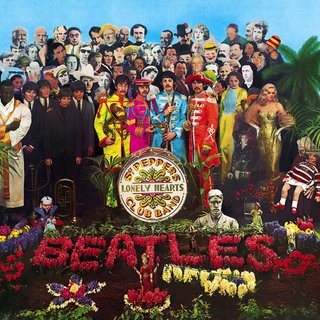 Without question, it is the most influential album of the rock and roll era, and arguably the most significant piece of Western music since Stravinsky's Rite of Spring.

If you've never listened to this masterwork by the twentieth century's most important musical artist, I urge you to do so posthaste.

The Beatles began recording the album near the end of 1966. Too tired from incessant touring to even think about hitting the road again, too burned out from controversies ranging from John Lennon's "bigger than Jesus" confusion to a disastrous stop in the Philippines which nearly cost the band their lives, and still by far the most popular musical act on the planet, the group decided to concentrate their efforts on recording an album of music which initially reflected their childhood memories from Liverpool, England.

The first fruits of these sessions were Paul McCartney's "Penny Lane" and Lennon's "Strawberry Fields Forever". Brilliant and far more complex than the pop music of the day, the songs were released as a 45 RPM single, quickly hitting #1 and still considered the greatest double-sided single in history.

Recording continued as the band felt free to experiment with new sounds and new approaches to pop songwriting (as well as popular drugs of the day, such as marijuana and LSD). 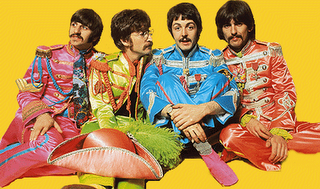 While the Beatles toyed with their studio masterpiece, the Monkees took over the airwaves and Brian Wilson and the Beach Boys (with the aid of the brilliant session band known as the "Wrecking Crew") released the stunning album Pet Sounds.

When Sgt. Pepper was released on June 1, 1967, it forever revolutionized popular culture, from the music to the artistic album cover to the thoughts, ideas, and freedom evident in the project. Music historians note that with Sgt. Pepper, popular music ceased to be music simply "to be danced to" and began to be music "to be listened to".

From the rocking intro of the title song (employing one of McCartney's all-time greatest "rock" vocals), to the brilliant simplicity of "With a Little Help from My Friends", to the psychedelic beauty of Lennon's "Lucy in the Sky with Diamonds", to George Harrison's mystical trip "Within You Without You", to the dance hall memories of "When I'm 64", to the jaw-dropping experience of "A Day in the Life" (considered by many critics to be the greatest single recording of the twentieth century, and featuring perhaps the finest, most creative drumwork in rock and roll history, courtesy of Ringo Starr), and every song in between, the album is an adventure for the ears and the intellect.

If you're not a Beatles fan, you should be. If you've never listened to Sgt. Pepper, do your ears a favor and listen to it. If you've listened to it before, listen again and experience again God's great gift of music.

You will never cease to amaze me...going from Pentecost to the Beatles! Keep up the great work!