The media seems distracted and a bit shocked at the recent announcement that DC Comics is reviving the long-defunct character Batwoman as a lesbian (see the story here). 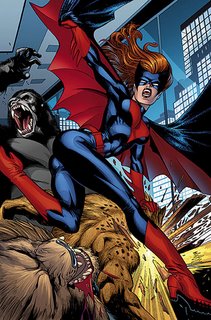 A silly character to begin with, the fact that she wasn't a functioning part of the DC Universe for decades was merciful. Now, as part of the year-long project 52, Batwoman is being revived and, apparently, will be a homosexual.

Why is this disturbing, much less newsworthy?

The best superhero comic books have always been story-driven and character-driven. Stan Lee's classic work on Spider-Man and The Fantastic Four (aided usually by the brilliant Jack Kirby, the god of comic book artists), Roy Thomas' mid-1970s sagas starring the Avengers, Marv Wolfman and George Perez's wonderful 1980s work on New Teen Titans, Chris Claremont's years on X-Men, Geoff Johns' work on JSA, and Grant Morrison's work on JLA all succeeded because they were driven by well-written stories, not for any peripheral reasons. This is especially true for Alan Moore's Watchmen and Frank Miller's The Dark Knight Returns, phenomenal pieces of work which demythologized the superhero genre and changed the way subsequent writers approached the medium.

My point is simply that if Batwoman's sexuality is driven by a well-written story, then great. Yes, if it's part of some "master plan" to push a particular political agenda, that's a real shame. But it seems to me that the writers handling the project have a real opportunity to do some quality work here. The media (and comic book fans especially) ought to give them a chance.