The big news in the world of sports (other than Mexico's win over Iran and the USA's embarrassing loss to the Czech Republic in the World Cup) is that "Big Ben" Roethlisberger, starting quarterback for the Super Bowl champion Pittsburgh Steelers, was seriously injured today in a motorcycle accident. 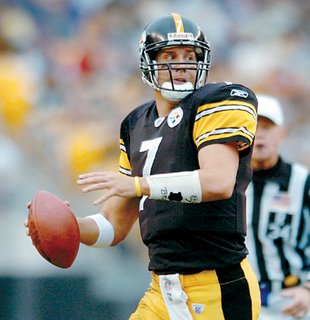 The news is sketchy right now. The Pittsburgh Tribune-Review is reporting that Big Ben, "...lost most of his teeth, fractured his left sinus cavity bone, suffered a nine-inch laceration to the back of his head and a broken jaw, and injured both of his knees." It sounds pretty ugly.

Our primary prayers are, of course, for the health and safety of this gifted young man. He has brought a great deal of joy and hope to the people of western Pennsylvania and some wonderful victories to the Steelers, the greatest franchise in all of sports. May the Father be with Big Ben at this hour; may the Son comfort his family and friends; may the Spirit guide the hands of the doctors and nurses caring for him.

Secondarily, this could shatter not only the upcoming Steelers season (training camp is to start next month), but the future of the team. If Big Ben doesn't recover to his full abilities, the long-term plan built around him as the team's field general will need to be scrapped. The thought of repeating a Super Bowl victory without Big Ben on the team is almost unthinkable. Big Ben's back-up, Charlie Batch, is a fine quarterback, but does not possess the "intangibles" owned by Big Ben...intangibles which produce not only exciting wins but, more importantly, championships.

For Steelers fans, there is much to ponder these days.