Last evening, the final episodes of That 70s Show and Will & Grace aired on television. I managed to watch both finales (surprisingly, considering I haven't seen a first run episode of either show in at least 2 years).

Will & Grace was on TV for eight seasons and in that time was usually a very funny television show. 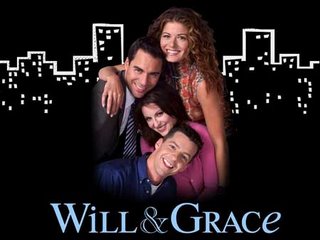 The writers/cast/directors/producers were obviously committed to pushing the boundaries of television, portraying homosexuals in non-threatening ways...focused on comedy. The show, while having clear stands on the issue of homosexuality and the related political tempests, was never too preachy, and this was its strength. Making people laugh at funny characters and situations was its mission...and that's good. When the series sometimes lost focus, spending too much time on the soap opera love lives of its main characters, it was relatively boring. Luckily, the show had two supporting characters...Jack and Karen...who were among the most dementedly funny characters ever seen on television and often saved the show from itself (BTW - there simply aren't enough Emmys to give to Sean Hayes and Megan Mullally, the two gifted actors who brilliantly portrayed Jack and Karen for 8 seasons).

The finale was unsatisfying. It was fairly dark for what had been a relatively "light" show. Will and Grace not speaking for years...Jack and Karen, for the first time, reduced to seriously supporting players. The highlight in an otherwise disappointing finale was the Mullally/Hayes performance of the Nat King Cole classic "Unforgettable".

The other finale last evening was That 70s Show. 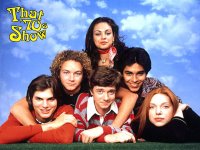 For most of its 8 seasons, this show was perhaps the "hippest" series on TV, and birthed several stars, including the excellent Topher Grace (set to portray Venom in Spider-Man 3). The final episode had an odd moment or two, but the fact that Kelso and Eric returned made up for any faux pas. The "old gang" was together one more time to ring in the new year. The series ended with a license plate display which showed the registration date of 1980. A good, relatively faithful ending to a very funny show.

So, what good shows are left on TV? My wife watches Grey's Anatomy and Desperate Housewives, which aren't great shows. The once-great Alias, starring the talented Jennifer Garner, is going off the air next week. I guess CSI and Lost are still on, and just about everybody watches American Idol. Boston Legal, starring the legendary William Shatner, is probably the best drama on TV right now.

But, you know, I don't get too many opportunities to watch TV. When I do, I often watch reruns of M*A*S*H or Seinfeld. There aren't very many great shows on nowadays, and very few funny sitcoms.

That's really too bad. We all need to laugh. Laughter is one of God's greatest gifts. Few things are as spiritually fulfilling or theologically profound as sitting in the arms of someone you love and laughing together at a movie, a TV show, a play, or other form of artistic expression. I hope that the TV networks don't focus too much on silly reality programming (which is relatively cheap to produce) and dark dramas (CSI is plenty) that we don't see any truly funny sitcoms. And, if they fail us, then M*A*S*H is on every evening at 11 PM on the Hallmark Channel.