I'm not a country music fan. Most of it I find silly, unsophisticated, and utterly juvenile. There are exceptions, of course. Johnny Cash is one of the greatest American artists of the last century; Shania Twain writes pretty good songs, and she and Faith Hill, a very strong singer, are both easy on the eyes.

The Dixie Chicks, also easy on the eyes, are a fine bluegrass band. I don't really follow bluegrass, but they seem to me to be pretty good at what they do. 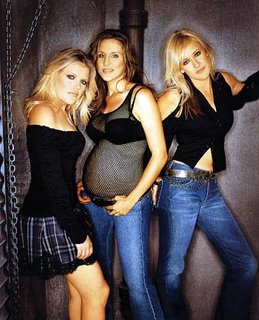 In March of 2003, singer Natalie Maines said at a concert in London, as the United States was preparing to invade Iraq, "Just so you know, we're ashamed the President of the United States is from Texas." This naturally offended the obviously conservative country audience, and there was a backlash. While their subsequent tour fared relatively well, record sales and radio airplay plummeted. The group also claims that some more dernaged and disillusioned fans made threats against the all-female trio.

Now, the group is out with a new CD. Critics seem pleased with the music. The first single, "Not Ready to Make Nice", was pretty much banned by country radio and peaked at a paltry #36. The second single, "Everybody Knows", peaked at #48, with, again, very little radio exposure (see here for the story). Are they in trouble?

As a non-country fan, it seems pretty evident to me that from a strictly business perspective, Maines comments were stupid. A cashier at McDonald's shouldn't tell people that burgers and fries are bad for your cholesterol...a ride operator at Kennywood shouldn't tell people that rollercoasters are dangerous. These are idiotic things which can clearly affect your livelihood. If you can't in good conscience serve burgers and fries, then become an accountant or a policeman or a nurse. If you're a country music singer, you need to recognize just who the people are who purchase your music and who attend your concerts. Ms. Maines' statement was an extremely poor business decision.

Now, nobody should threaten these ladies. That's appalling.

But almost as appalling has been Ms. Maines' inability to take responsibility for her own words. In the almost-hit "Not Ready to Make Nice", she seems to blame others for her recent trials. That's not uncommon; we humans are awfully bad at taking responsibility for our own actions. But to hear the Dixie Chicks say (I'm paraphrasing), "Our career is in jeopardy...our record sales are down...we hear boos from the audience...how dare they treat us this way", is monumentally self-centered.

With all due respect, that's OK; I don't expect actors and musicians to be geniuses or informed political commentators...I expect them to act and sing. And I appreciate the Dixie Chicks willingness to express themselves through their music. What's disappointing is that the "selves" they are representing seem pretty shallow. Which is too bad for such a talented group of ladies.

I predict that the new CD will end up doing pretty well, though maybe not as well as the group's previous efforts. I'm sure that the Hollywood elite will call them "brave" and "courageous", which is Hollywood-speak for "Think and talk like us."

I hope that country music fans come to the place where they appreciate good music in spite of people's personal silliness, and embrace this bluegrass band again. Musically, they could do a lot worse.

As a bluegrass purist and musician/singer myself, I utterly declare that the Dixie Chicks are not bluegrass...not even close.