A recent poll has suggested that only 29% of the American people approve of the job performance of President Bush. 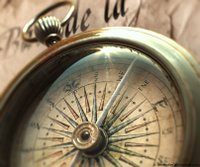 Who cares? How does this matter at all? Why is this considered newsworthy?

If he were running again, it would certainly merit some attention. But he isn't. I suppose that inasmuch as the approval numbers affect the Congressional elections this November, politicos need to keep their eyes open.

But these silly polls don't really matter at all. Not to any real leader worth his or her salt.

Leadership isn't about pleasing your constituents...although that isn't necessarily a bad thing. Leadership involves following your moral compass even in the face of difficult times, when your "poll numbers" seem low. If your moral compass - your valued principles - points to what is true and right, then you'll be OK.

I'm not claiming that President Bush's moral compass is perfect, although I believe him to be a sincere Christian man who wants to do the right thing (but I often disagree with him as to what "the right thing" might be). But "Big News" in this nation is as corrupt as "Big Tobacco" or "Big Oil" or any other corporate principality. "Big News" has its own agenda and is driven by ratings, money, and, at times, radical political beliefs. If hyping essentially meaningless poll numbers will drive the agenda, they'll do it. Whether or not these "stories" matter is inconsequential.

I would urge President Bush, Prime Minister Blair (who is experiencing similar problems), and leaders around the world, whether Church or State, to follow a true moral compass and lead honestly. If your moral compass points to "true north", which is Jesus Christ, then the Holy Spirit will define and create effectiveness...not public opinion or corporate news.

yes honey [daddy] (i'm going with the crowd)
nice! i like the politics side of you! i c where i get it!
GO GEORGE BUSH!

I would amen you, but it would sound redundant. Oh, I think I'll live dangerously...Amen brother!

Political opinion polling has been reduced to as trivial a state as fashion trends: this season we'll all agree to wear blue capri pants and hate George Bush.

No longer do respondants give honest assessments; rather, they deem their lot cast effort in the name of 'the cause', and project their desires over truth.

Polls are useful, but only when larger variables such as integrity and ethical questioning are considered. One can use MSNBC's and CBS's web polling as a measuring stick...if you understand they they poll 15+ points to the Left of reality.

Yes, it matters. There's no re-election coming up, but right now we have conservatives calling for Bush's impeachment over the Minuteman thing. And, of course, the Left has not stopped calling for his impeachment for five years.

If Bush's polls fall even lower, say below 20%, House Democrats will smell blood in the water. They will sense a great opportunity rising. And they will move on it.