Yesterday, the Judicial Council, the "Supreme Court" of The United Methodist Church, issued its "final" decisions on two cases regarding sexuality and the Church. 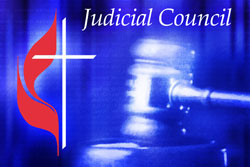 The Judicial Council had been asked to reconsider Decisions 1031 and 1032, which stated that the rights of a pastor had been violated when he had been placed on a leave of absence after refusing to admit into local church membership a "self-avowed, practing homosexual" (a legal term in the UMC). The Judicial Council had also affirmed that the pastor-in-charge of a local church was the one who had the right to determine when a person was eligible for membership in the local church. The Council of Bishops and others strongly disagreed with the decision, maintaining that they really had the final word, and no one could be denied membership if we were committed to being an inclusive Church (see Article IV of the UMC Constitution).

The Judicial Council decided yesterday, in Decisions 1040 and 1041, that they would not reconsider their earlier decisions. According to Church law, therefore, the pastor-in-charge of a local church is the one with the authority vested by our Book of Discipline to determine when a person is eligible for membership. The Council of Bishops, legally, lost this case. Undoubtedly, the Church will revisit the issue at our 2008 General Conference in Texas. And, I assume, there are a lot of angry Bishops out there today. (For the reaction of the evangelical wing of the Church, see the statement of the "Good News" organization here.)

In my view, the Church has in the past acted unfairly toward homosexuals. We seem to have - at times - singled out this one behavior as a grave sin, ignoring others. While homosexual behavior is viewed by the Church as "incompatible with Christian teaching" (another UMC legal term), we sometimes turn our heads at heterosexual sin, or even many non-sexual behaviors which are also "incompatible with Christian teaching". Both the left and the right have focused too much on homosexuality, to the detriment of our mission.

I believe we should maintain the classical Christian understanding that sex is acceptable only within the marriage covenant, and that behaviors which violate this understanding are sinful. This means that heterosexual fornication is as "incompatible with Christian teaching" as is homosexual behavior. Why are we afraid to speak this truth?

I affirm the Judicial Council. I believe that they have authority to determine these interpretations, and I believe they have acted properly. They are correct; the Council of Bishops is incorrect.

My prayer is that we can affirm this position at General Conference in 2008, that our Bishops adhere to Church law and enforce it, that we can stop singling out homosexuality at the expense of other sins, and that we can move on and begin to focus our efforts on disciple-making for the transformation of the world.

It is our mission which has suffered the most in this controversy.