Two choices in the game tonight: 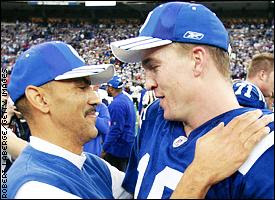 root for Chicago OR believe in God. It's that simple.

Doesn't everyone want to see Peyton Manning win a Super Bowl, and Tony Dungy win one as a coach?

The game won't be as exciting as last year's Super Bowl, when the Steelers won it all, but at least with Manning and Dungy in the game, there's something good upon which to focus.

I'll grab my Playstation instead.

I can't stand either Dungy or Manning. Too bad they won. As I have said before: Da Bears.