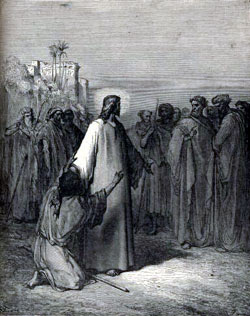 came down from the mountain, a large crowd met him. A man in the crowd called out, 'Teacher, I beg you to look at my son, for he is my only child. A spirit seizes him and he suddenly screams; it throws him into convulsions so that he foams at the mouth. It scarcely ever leaves him and is destroying him. I begged your disciples to drive it out, but they could not.'

"'O unbelieving and perverse generation,' Jesus replied, 'how long shall I stay with you and put up with you? Bring your son here.'

"Even while the boy was coming, the demon threw him to the ground in a convulsion. But Jesus rebuked the evil spirit, healed the boy and gave him back to his father. And they were all amazed at the greatness of God."
- Luke 9:37-43 (NRSV)


Demons seem to have been in abundance in Jesus' day. Many scholars believe that what the Biblical writers referred to as possession by "foul spirits" may actually be conditions and diseases in our era which are well known and treatable (such as epilepsy). Some theologians believe that demonic activity may have been so prevalent because of Jesus' presence in the world, which inspired the forces of evil to go on a full assault in an attempt to thwart the divine plan.

Both may be true in part. But both explanations hinge on one claim: that demons aren't really that active in our world today. Both thus fall short of the most plausible explanation for the demon stories in the Bible: demonic activity is a part of our reality.

Cultural critic Hal Lindsey made a career out of exploiting fears of demonic actions. The recent works of Tim LaHaye and Jerry Jenkins continue Lindsey's distortions of Scriptural truth, and they've made millions from their fear-mongering. Author Frank Peretti wrote two novels in the late 1980s which portrayed demonic activity in a Pentecostal-inspired adventure style. While Peretti's novels remain problematic theologically, they are nonetheless exciting attempts at demonstrating the spiritual forces at work in our world in an accessible way (and, in my view, they make excellent Halloween-time reading, if not taken too literally). I even wrote a Peretti-inspired short story during my college years (demons active in American higher education...what a concept!).

Demons, however, are very much still with us. They may well be the ugly little miscreants described in Peretti's novels, whispering "sweet nothings" in people's ears, inspiring and misleading them, causing all kinds of problems. They may well be twisted armies, distortions of the hosts of heaven, awaiting Ragnarok, believing they still might actually win in the end.

But, whether this Pentecostal persepective bears any validity, we can know for sure that just as in Jesus' day, demons abound. Two thousand years ago, they caused severe mental illness, emotional distress, and alienation from family, society, and the covenant community. This is stil true today.

Demonic activity may take the form of addiction, abuse, violence, war, terror, dehumanization, or murder, but it is still demonic activity. It may look like poverty, disease, alienation, neglect, hate, racism, sexism, or bigotry, but let's name it: evil...demonic...Satanic...radical sin.

These forces are powerful and real but, as the text from Luke's Gospel makes clear, they are subordinate to the power of Christ. What do we have in our arsenal to fight these evil forces? We have the power of radical healing...baptism...confession of sin...forgiveness...mercy...the Eucharist...nonviolence...prayer...praise...love...hope...grace. Our Lord and his Spirit-empowered Church are infinitely more powerful than the dark forces which patrol this world, seeking whom they may devour; we must remember this when facing the demons, and we must faithfully act to rebuke evil and bring healing deliverance to this broken world, for fighting demons is still our mission.
at 4:45 PM

A skewed worldview has convinced many Christians that demons aren't real and that believers in them are superstitious. It is rather clever of the Devil to convince us that he doesn't exist. After all, we won't fight that which we think is not real.

After speaking with an Ugandan minister about demons being real or just misunderstood medical conditions, he told me.."demons are real...very real. We prayed over my mother who condemned my Christianity and 7 demons left her. She converted on the spot and the demons have not returned".
He went on to share that they could not plant a new church in a village until the demon who possessed the leader of the village was cast out.

To hear him tell of these incidents, and many more with graphic detail, I know one thing for certain: He had no doubt as to the reality of demons...real demons at work in the world today.

i rather enjoyed the peretti novels when i read them back in the 90's. it does give a nice imagery to the demons as i don't think we can totally comprehend their true nature. but we should all be able to recognize that we encounter them.

i hope we don't plan on taking sword fighting classes (as some faith expressions do) but that we can act faithfully when we encounter the evil of the world.

Give us the Peretti-ish story!! I want to read the short story!!

I'd really have to dig to find it, and it wasn't very good!

My inaugural address at the Great White Throne Judgment of the Dead, after I have raptured out billions! The Secret Rapture soon, by my hand!
My Site = http://www.angelfire.com/crazy/spaceman
Your jaw will drop!

I'm writing a novel and need some help. Without having to read the whole Bible until I find it, could you refrence me to someone who, besides Jesus, cast out evil spirits.
I'd really appreciate any help.
Thanks
BTW, great post!