(Thanks to Bruce Alderman, who took this quiz two years in a row and inspired me to do the same...interesting exercise.)

I took this quiz last February. My results can be viewed here. A year ago, I still scored highest as "Evangelical Holiness/Wesleyan"...and, actually, at the same percentage as this year upon taking the quiz again.

A difference is that I scored higher percentages this year as "Roman Catholic" and (especially) "Emergent/Postmodern"; not sure why unless it's the books I've read since last year. The five at the bottom remained there, although my "Classical Liberal" score is significantly higher than last year. 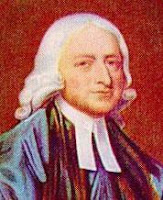 You scored as Evangelical Holiness/Wesleyan.
You are an evangelical in the Wesleyan tradition. You believe that God's grace enables you to choose to believe in him, even though you yourself are totally depraved. The gift of the Holy Spirit gives you assurance of your salvation, and he also enables you to live the life of obedience to which God has called us. You are influenced heavily by John Wesley and the Methodists.

When I took the test I scored as Weslyan first, Emergant second, and Roman Catholic third. I always like taking these exams they're just something a little fun to brighten the day.

Enjoyed the quiz! My scores