"...some Pharisees came and said to Jesus, 'Get away from here, for Herod wants to kill 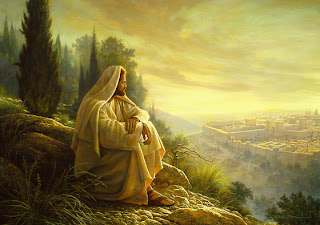 "He said to them, 'Go and tell that fox,
"Behold, I cast out demons and perform cures today and tomorrow, and the third day I finish my course. Nevertheless I must go on my way today and tomorrow and the day following; for it cannot be that a prophet should perish away from Jerusalem."

"O Jerusalem, Jerusalem, killing the prophets and stoning those who are sent to you! How often would I have gathered your children together as a hen gathers her brood under her wings, and you would not! Behold, your house is forsaken. And I tell you, you will not see me until you say, 'Blessed is he who comes in the name of the Lord!'"
- Luke 13:31-35 (RSV)
"Gathering" is a beautiful theme of Jesus in the Gospels. Part of Jesus' mission was to gather the faithful children of God into one covenant community; he was to be a unifying force among God's people, teaching a new way to love...a new way to gather.

"...Caiaphas, who was high priest that year, said to them, '...it is better for you to have one man die for the people than to have the whole nation destroyed.' He did not say this on his own, but being high priest that year he prophesied that Jesus was about to die for the nation, and not for the nation only, but to gather into one the dispersed children of God." (John 11:49-52, NRSV)

Caiaphas and the other leaders had one way of looking at "gathering", Jesus had another.

In the old order, unity was forged by forcing out those who disagreed with the status quo...in the case of Jesus, forcing him out by execution. The Church, sadly, can be very "Caiaphas" at times. Rome excommunicating Constantinople...Constantinople excommunicating Rome...Roman Catholics excommunicating Protestants...Fundamentalists essentially doing the same to Roman Catholics and mainline Protestants...dominant whites forcing out minorities...on and on and on, it continues today with liberals marginalizing conservatives and vice versa.

things. Instead of expulsion of persons to create unity, Jesus lives a life of forgiveness, embracing those who seem "unembraceable" or who may even oppose his mission. Yes, the people of Jerusalem had killed prophets and ignored God's commands, but Jesus' impulse is still to gather them up "...as a hen gathers her brood under her wings...", even as they rebuffed his attempts.

Jesus' way is the way of forgiveness, not rejection. I suppose that "excommunication" has its place and purpose, but even when employing this painful act, the Church should be looking for ways to reach out, love, and serve (I am reminded of a time several years ago when our Conference discontinued a probationary member, and did not immediately offer him any kind of help or severance pay; it took a real battle on the part of a few other pastors for us to do the loving thing). After all, "...God...through Christ...has given us the ministry of reconciliation." (2 Corinthians 5:18, NRSV)

Jesus is essential, but if he's used to exclude, we're no longer his people; he's about gathering folks in, not pushing them out. This doesn't mean we do anything to gather nor that we gather without discernment; we aren't about ignoring our historic doctrine, liturgy, or Scriptures, aspects of the faith which Jesus strongly affirmed. But our focus should be on embracing and including rather than on determining "who's in" and "who's out" and what one must do to "be a member" (a truly outdated idea).

Reclaiming Jesus' way of gathering is crucial for the twenty-first century Church, where Caiaphas' exclusionary ways no longer have any meaning.

Thank you for saying what really needs to be said. So much still divided us as a church, as pastors, as Christians. Your piece brought Jesus'real intentions to light. Do you think that the competitive nature of ministry has something to do with it? Check out my blog on clergy and emotional health at http://rodazone.blogspot.com

This is what I have been thinking about and praying about lately. What you said helps me to put my thoughts into words. Thanks