Fundamentalism is annoying and obnoxious. 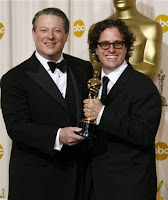 I was reminded of this last evening while watching the Academy Awards. To no one's surprise, Al Gore's An Inconvenient Truth won two Oscars (Best Documentary and Best Song). The film is a documentary which basically elaborates on a Gore presentation regarding the theory of human-caused climate change.

Understand...I'm not denying that "global warming" (an imprecise term, to be sure) may be real. It may be absolutely true, which would surely make it one of the most important issues of our time.

But the truth is that there are problems with the way it has been presented to society. There are many scientists who believe that climate change research has been dangerously politicized and has failed to properly utilize the scientific method. In short, while most climate experts believe there is some truth to the theory, there exists no unanimity regarding the issue, or even the broad acceptance enjoyed by evolutionary theory.

What bothers me about the issue is that we have seen the development of what could be called "environmental fundamentalism". That is, as I said, annoying and obnoxious. It's also a mite scary.

Fundamentalism is a way of thinking in which a person believes something so strongly that he or she is willing to scare others in order to convince them of the correctness of the belief. Additionally, fundamentalism is vehemently opposed to any other perspectives...sometimes violently so.

It refuses to acknowledge that any other point of view may contain truth or that there is room for discussion. The stereotypical image of the Christian fundamentalist is that of a street preacher screaming that folks will go to hell unless they repent...now. Muslim fundamentalism in its most extreme form has taken root in the world through terrorist acts such as the 9/11/01 tragedy.

I don't believe that scaring people is an appropriate way to change a person's opinion. Jesus seemed to prefer the methodology of radical love; St. Paul seemed to prefer reasonable dialogue and discussion. I believe that Christian fundamentalists veer from the true path in terms of methodology (also theologically, but that's another post for another day). I also don't believe that discussion ever fails to be an option; I may be utterly convinced of certain truths, but I'm always willing to talk about them.

Not only was Al Gore seemingly canonized by the attendees for his work in the global warming debate (I almost expected Leonardo DiCaprio - a fine actor - to weep in religious ecstasy while he was talking with Gore onstage), but the prevailing attitude was, "Agree with us or you're worthless."

Writer/physician Michael Crichton, best known for books such as Jurassic Park, Sphere, State of Fear, Prey, and for creating the television series "ER", has actually argued that

the modern environmental movement is very much a religion, with its own beliefs about a fall from grace, salvation, and judgment day, and that believers will defend their faith just as any other fundamentalist would. I think there's truth in this idea. Try denying global warming theory, even if you may tend to agree with it - just for the heck of it - with someone who wholeheartedly, vehemently believes it. You may be surprised and saddened at the result.

The reality is that fundamentalism often contains a bit of truth: Jesus did come into the world to save humanity, penitence for salvation is important, and hell is a distinct possibility for many people. But scaring people into belief, and marginalizing those who fail to convert, is morally and ethically wrong, no matter how important the issue may be. Global warming theory may indeed be accurate, but scaring people into belief with doomsday presentations, and marginalizing those who are not convinced, is still morally and ethically wrong.

I am not someone who condemns Hollywood for its immorality and irresponsibility, though at times the Hollywood community has been both immoral and irresponsible. I genuinely believe that most folks in Hollywood mean well and sincerely want to help, and that Hollywood is filled with many extremely talented people who do extraordinary work.

But my fear is that last evening we caught a glimpse of something more than simply annoying or obnoxious. Fundamentalism can easily devolve into far worse things, and my prayer is that the environmental fundamentalists of Hollywood don't go too far in supporting and spreading their faith.

Good post. Not a tree hugger so I don't understand much of the debate. Not green, drive too much, and I enjoy milk too much to worry about Methane gas emissions. Therefore, I say, watch "Ice Age" relax, and understand that our world has gone through many climate changes. Then I will have a cup of hot cocoa and put my gloves on to shovel some of the remaining snow off my walk from the last month of extreme weather.

As I was preparing to teach Luke 6 this week, I was promtoed to post my own take on this issue. Your blog brought to my attention the Crighton article, so I even gave you a link from my blog...