"...Jesus took with him Peter and John and James and went up on the mountain to pray.
And as he was praying, the appearance of his face was altered, and his clothing became dazzling white. 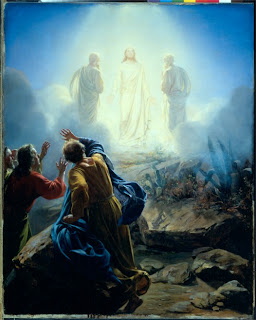 "And behold, two men were talking with him, Moses and Elijah, who appeared in glory and spoke of the fate that awaited him in Jerusalem.

"Now Peter and those who were with him were heavy with sleep, but when they became fully awake they saw his glory and the two men who stood with him.

"And as the men were parting from him, Peter said to Jesus, 'Master, it is good that we are here. Let us make three tents, one for you and one for Moses and one for Elijah' — not realizing what he said.

"As he was saying these things, a cloud came and overshadowed them, and they were afraid as they entered the cloud.

Why is it that preachers often preach this story from the perspective of the wonders of a "mountaintop high"? Too often, we fall into the mindset that the Transfiguration story is one that points to the idea that while these "highs" can be wonderful, we need to return to the valleys, where the people live and where there is ministry to be done.

We tend to obscure this simple fact: this story is scary! Jesus glows and then is joined by two dead prophets! What we have here is a ghost story!

In this light, we are reminded that Transfiguration Sunday happens each year just before Lent, and that the real theme of this story is not the wonderful high of a mountaintop experience, but the cold, frightening anticipation of death. After this event, Jesus began to turn his face toward Jerusalem and "the fate that awaited him" there.

We have here an excellent "pre-Lent" narrative, a fine opportunity to begin the preparations for the dark pain of Good Friday as well as the unspeakable joy of Easter. Let's not just "get through" Transfiguration Sunday without giving this remarkably opportunity its due, and without giving this creepy text the morbid attention it deserves.
at 6:26 AM

Thank you for a very thought provoking direction for this sermon. I suppose I was inspired to lean that way when I started putting together "scratch" sermon titles for my months ahead back in December and earlier.
I have chosen 'The Mountain Top' in previous years, and this year was leaning toward "Behind the Veil". I think you sold me.
Thanks,
DC

Thanks for the inspiration for transfiguration Sunday. I've never looked at it from the "I see dead people" perspective.
Thanks.

Good point. The text notes Jesus
was talking to Moses & Elijah about
his "exodus" or "departure." So
the issue is about where he goes
from the mountain: to Jerusalem to
die.

Well gee, you sort of stomped all over some of what I just posted.

But I must admit you did it well! I'm glad I read you before I finished my sermon for Sunday- you're making me look at this text from yet another angle. Great post.

Great post, and neat to see some wider coverage on your blog. Keep up the good work!

I should like to offer my most humble salutations and felicitations on this festal day of St. Valentine. I have the highest regard for our community, the “Methoblog” and wish we could make acquaintance under more auspicious circumstances as I am sure that these acquaintances may yet become a valuable and enriching friendship as we exhort and instruct each other to be conformed in the image of Christ.

I remain God’s most humble servant,

Keith,
Good thought! In my prep this week - something caught my eye this time around. Luke says "8 days after these sayings..." The sayings about his upcoming suffering, death & resurrection. In Mark's gospel after Jesus says these things Peter rebukes him - say it isn't so, Jesus! Interesting to note in this light that in the midst of prayer, when the cloud descends & God's voice says, "Listen to him," that rather than a general discipleship command, could this be in reference to listening to what Jesus has to say about his upcoming passion? Also - Ron Cole-Turner in his commentary on this text in Feb/Mar 2004 issue of Lectionary Homiletics says, "It is tempting for us to ignore the darkness and death, which if anything are more central to this story than light & glory." He goes on to say exactly what you mention - this is not the usual mountain-top experience followed by a "sorry descent back to reality." Reality is on the mountain-top, "both light and dark together with glory and death." Going to use this text with 2 Cor reading, especially verse 18 where Paul talks about our being transformed into the same image of Christ. Sermon title is "Extreme Makeover." Thanks for your thoughts on a great post!