The Pittsburgh Steelers made it official today: Mike Tomlin is their new head coach.

A native of Hampton, Virginia, Coach Tomlin played his college ball at William & Mary and got his NFL start as part of Tony Dungy's staff in Tampa Bay. 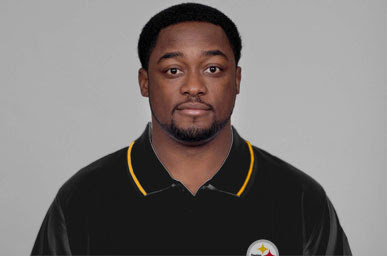 He spent one year as the defensive coordinator for the Minnesota Vikings before the Rooneys hired him today to take over the NFL's finest organization. He is married with three young children, and is, at 34, the youngest head coach not only in the NFL but also in every major American team sports league (NBA, NHL, MLB).

I was able to watch his introductory press conference this afternoon, and Coach Tomlins seems very impressive. He is calm and well spoken, appreciates Steeler-style football, claims to be an historian of the game, and is a sharp guy...he patiently handled the media, was funny when he needed to be, and was very likeable.

Coach Tomlin said, regarding his potential assistant coaches, that he was looking for good men who just happen to be good coaches. As I've mentioned before, character is the top trait needed for leadership, and Coach Tomlin seems to have it in abundance, idolizing such class A folks like Dungy and Lovie Smith. It looks to me as if the Rooneys have chosen another winner.

I hope that the coach and his family have great success in Pittsburgh and that they remain with the team for a long, long time. Our prayers are with them!