Searching for a Vision

"Now after Jesus was born in Bethlehem of Judea in the days of Herod the king, behold, wise men from the east came to Jerusalem,

saying, 'Where is he who has been born king of the Jews? For we saw his star when it rose and have come to worship him...'

And behold, the star that they had seen when it rose went before them until it came to rest over the place where the child was.

When they saw the star, they rejoiced exceedingly with great joy.

And going into the house they saw the child with Mary his mother, and they fell down and worshiped him. Then, opening their treasures, they offered him gifts, gold and frankincense and myrrh..."
- from Matthew 2
The wise men (or magi) who appear suddenly at the end of the traditional Christmas story must have been remarkable people. They were considered to be among the most learned, respected people of their day. They were students not only of the night sky (and if you've ever enjoyed the wonder of telescopes, you can understand why!), but of the "signs of the times" all around them. Nature, politics, art...for these wise men, all of these and more held great meaning, and they were determined to figure things out.

The mysterious star which appeared during the time of Jesus' infancy caused them no small amount of confusion. Perhaps they had already reached a point in their lives when they felt they had figured it all out amd finally understood the crazy world in which they lived! Then, God threw this star into the mix, which sent the magi scrambling for answers.

they soon came to the conclusion, given their learning, that this omen pointed to a great birth, and that a new king - indeed, a new kind of king - had come into the world. Diligently and with great passion and a sense of urgency, they searched for this new king.

God had given them a vision of the future...or at least the promise of a vision, and they were determined to discover that vision. They set out on a journey which upset their routines, causing them to leave all things familiar, knowing that their lives would never again be the same...all out of a desire to see what God had in store for them and their world.

The wise men were remarkable. 2000 years later, we are called to share their life-changing journey...not only at Epiphany, but throughout our lives.

The Church is called to remember that God has given us a vision of the future...or at least the promise of a vision. We are called to set out upon a journey which will undoubtedly upset our routines and those things with which we are familiar, knowing that our lives...and our church...may never be the same. We do this not just for the sake of change or simply to have fun, but to discover what God has in store for us and our world.

Like the wise men, we must recognize the "signs of the times" and recognize that the world has changed...and is still changing! We, too, must set out on a journey, following the light of the Spirit, to find the vision God has for us. 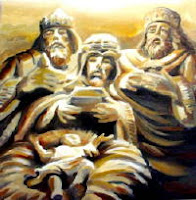 The really exciting part of the story isn't just the search, the journey...which is quite exciting itself...but the end of the search! The wise men found, at the end of their search, Jesus, the new king, like no king before or since. They offered him their gifts and, more importantly, their homage and devotion.

Likewise, Jesus is waiting for us as we search for his vision, for every worthwhile journey leads to him! Hallelujah! Exciting times lay ahead!
at 1:45 PM

Here's your Vision, at this web site:

Glad I could help.