since taking his episcopal seat in Washington D.C. Archbishop Wuerl, formerly head of the Pittsburgh Diocese, is taking heat from some conservative Roman Catholics who would like the Archbishop to ban from receiving the Eucharist any Washington politicians who support legal abortions. While in 2004, this debate most often involved Sen. John Kerry, the recent debate has primarily involved new Speaker of the House Rep. Nancy Pelosi. Archbishop Wuerl has refused to deny the sacrament to politicians who disregard Roman Catholic teaching regarding abortion.

I applaud Archbishop Wuerl for his stance. The Eucharist is not a weapon to be used to keep Christians in line. It is a truly powerful means of grace through which the Spirit works in and through those who participate in the holy meal. It is "a sacrament of redemption" (as our Articles of Religion state) and should never be used as a means of discipline. Certainly, the Roman Catholic Church has the right to instruct and discipline Rep. Pelosi or Sen. Kerry in any number of appropriate ways, as The United Methodist Church has the right to appropriately instruct and discipline President Bush...but the sacrament is not an appropriate tool.

In point of fact, Archbishop Wuerl may want to take an opposite 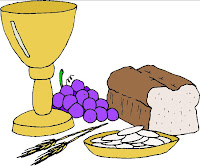 approach. If the Emmaus account in the Gospel of Luke is to be believed, and Jesus is truly made known "in the breaking of the bread", then the Archbishop should be requiring Rep. Pelosi to commune every day, in the hope that Jesus will be "made known" and the Speaker will begin to believe the teaching of the Church regarding abortion. Bishop John Schol may want to make the same requirement of the President.

In fact, here is a glorious proposal:

The Bishops of the Washington area - United Methodist, Roman Catholic, Episcopalian, Lutheran, whatever - should require the Christian servants in the city to celebrate the sacrament together each day. What a difference this could make! Imagine President Bush, Vice President Cheney, Sen. Kerry, and Rep. Pelosi sharing the bread and the cup before beginning their day's work! Imagine a campaign trail where Sen. Clinton, Sen. Obama, Sen. McCain, and Mayor Giuliani communed with one another daily. This may seem impossible, for both ecclesiastical and political reasons, but what a joyful hope!

The Eucharist could make a real difference in our nation's capital...not when used to divide and discipline, but when used to unite and empower...to remind these leaders that though they are separated by political beliefs, they are ultimately one in Jesus Christ, which is far, far more important.

That is some "outside the box" thinking. Or maybe not. Either way it is a powerful message. Thanks.

What a great idea.

Thanks for these wise words.