Without question, Jesus had a special place in his heart for the poor and the oppressed. This week's Gospel lesson from Luke 4:18-19 reminds us of Jesus' mission:

"The Spirit of the Lord is upon me,

for he has anointed me
to bring good news to the poor.
He has sent me to proclaim
release to the captives
and recovery of sight to the blind,
to let the oppressed go free,
to proclaim the year of the Lord's favor."

Repeatedly, Jesus ministered to those who existed on the margins of society, those whom the culture and the powerful had rejected. The late Howard Thurman used a word rich in depth and meaning to refer to this group of outcasts..."the disinherited". Jesus recognized that the poor and the oppressed had as much a right to live, to serve, and to enjoy the gift of life as those who had money and power, and Jesus was determined to do something about the imbalances of society.

We must also remember that Jesus did not ignore or neglect the rich. 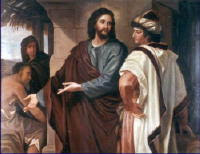 But, when a rich young man approached Jesus, Jesus requested that the man sell all he had and give the proceeds to the poor. In essence, Jesus told the young man, "If you're serious about following me, then become as one of the poor, as one of 'the least of these my brethren'." What a powerful moment.

Poverty in our world is a seemingly overwhelming problem. Billions of people live in poverty, going without water, food, medical care, or very basic education. How do we even begin to solve the great problem of poverty?

While that certainly has to be a concern which weighs heavily on the heart of every Christian disciple, we should not allow the magnitude of the problem to keep us from action. We need to be about the business of bringing good news to the poor...right now...today...if we are to be faithful followers of Jesus. Nothing should keep us from that call, which, as Jesus makes clear, has its origins in the Spirit.

In fact, St. Gregory of Nazianzus, one of the greatest theologians of the Church, said in Oration 14, “...agape [divine love] is the first and greatest of the Commandments … and its most vital part … is love of the poor.”

St. Gregory is saying that we show our love for God by loving the poor. Jesus' harsh and powerful words in Matthew 25 never seem to leave us alone long enough to give us peace!

The truth is that we don't like to be around the poor. We'd much rather give money to someone else...be it the government, the Annual Conference, or another charity...and let them help the poor on our behalf. We don't want to be bothered, especially with people with whom we simply don't want to spend time.

John Jones of Marquette University recalls a scene in one of the greatest novels ever written, John Steinbeck's The Grapes of Wrath, which sums up some of our feelings regarding the poor. The poor Joad family has just purchased gasoline for their vehicle, when they overhear the gas station attendants...

“Jesus, what a hard looking outfit!”
“Them Okies? They’re all hard-lookin.”
“Jesus, I’d hate to start out in a jalopy like that.”
“Well, you and me got sense. Them goddamn Okies got no sense and no feeling. They ain’t human. A human being wouldn’t live like they do. A human being couldn’t stand it to be so dirty and miserable. They ain’t a hell of a lot better than gorillas.”

We may not say those words, and we may not even consciously think those thoughts, but too often we act that way regarding our poor sisters and brothers.

But Jesus touched the lepers. 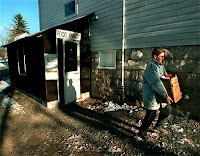 The poor need us to bring them good news...but we need them, desperately, that we might remember what it is we are all about. In so many ways, our faithfulness in this area (or at least the attempt at faithfulness) represents the difference between being an authentic Christian disciple and merely being a basically nice person. God's vision for the church includes a great emphasis on the poor...whether or not we clearly see his vision.

"Those who shut their ears to the cry of the poor
will also cry out and not be answered."
- Proverbs 21:13
* Read this for an article about a family caught in the cycle of poverty in western Pennsylvania.

* Read this for a progress report on poverty in Pennsylvania.

My friend and I were recently talking about how involved with technology our daily lives have become. Reading this post makes me think back to that debate we had, and just how inseparable from electronics we have all become.


I don't mean this in a bad way, of course! Ethical concerns aside... I just hope that as technology further develops, the possibility of uploading our brains onto a digital medium becomes a true reality. It's a fantasy that I daydream about almost every day.