Today, the top story in the sports world has been that Bill Cowher, 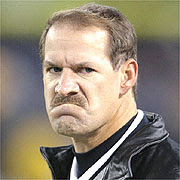 Head Coach of the Pittsburgh Steelers for 15 years, has resigned. Likely, he will take a year off before returning as a coach elsewhere in 2008.

I have been a Bill Cowher fan from the day he arrived in Pittsburgh to succeed Hall of Fame coach Chuck Noll. Despite the fact that he was following a true sports legend, one of the top 5 best coaches in professional football history, Coach Cowher never seemed intimidated; he always seemed comfortable in his own skin and confident with his own God-given gifts and abilities.

I think we can learn a lot about leadership from Bill Cowher's success, and, indeed, from the Pittsburgh Steelers organization as a whole. Things to emphasize:
Things to avoid:

On a personal note, listening on the radio to Coach Cowher's Tuesday press conferences helped to get me through a difficult period of my life, a few years back, and I'll miss those radio moments. 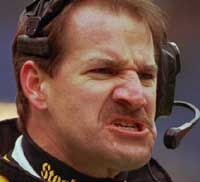 Cowher's 15 years in Pittsburgh will likely land him in the Pro Football Hall of Fame. He gave the folks of western Pennsylvania great joy, and for that, I am grateful. I pray that his "time off" is relaxing and fruitful, and that his future is filled with peace and success. Thank you, God, for Bill Cowher.

The search for his successor will be a key story in the sports world in the weeks ahead, and will likely dominate local media. The two leading candidates for the position are also two leading candidates for the other open coaching jobs in the NFL, which is a testament to Coach Cowher's ability to raise up leaders, since they are both currently on the Steelers' staff.

Whisenhunt is the Steelers Offensive Coordinator. What makes him so impressive to me is that he is able to "tweak" things as a team goes through a season, adapting well and still remaining productive, efficient, and faithful to the vision. Whisenhunt has interviews lined up with several other NFL teams for their top jobs, including Arizona and his native Atlanta. He would make a fine head coach.

A native of Scottdale, PA in southern Westmoreland County, Grimm won Super Bowls as an offensive lineman for Joe Gibbs' Washington Redskins before entering coaching. He certainly shares Coach Cowher's mindset of "smash mouth", "blue collar" football, which emphasizes hard hits, the running game, and a tough defense. Other teams are interested in Grimm and he has interviews set up in other NFL cities for top jobs. He, too, would make a fine head coach.

There are also other intriguing possibilities...

My guess is that Russ Grimm gets the job, with Ken Whisenhunt a close second. I also think Whisenhunt will land in either Miami or (more likely) Atlanta. Either man is a fine choice for the Steelers.

Let's hope that the success continues, and that the Steelers remain a contender for years to come.

PS - If Dan Rooney should happen to be reading...I'm available. I'm sure the Bishop would grant me a leave of absence.

What do you think the chances are of Cowher going to Miami? He certainly sped up his departure when he heard the Miami job was open.

He indicated he was taking some time off, and I believe him. Miami would have to throw an OBSCENE amount of money his way, and would have to be willing to give the Steelers all KINDS of draft picks, and even then, the Rooneys might say "no".

I think Coach Cowher will golf for a year and come back next year somewhere. If Carolina disappoints again, then I'd guess they'll fire their coach and make an offer to Bill Cowher, who might find that offer hard to resist, since he'll be living down there.

Other teams that I think may make a run at Bill Cowher next year are Dallas, Jacksonville, NY Giants, Tampa Bay, and Washington.

He's still young and when he's
ready the offers will pour in.
The Tar Heel state will welcome
him with open arms. After 15
years he probably needs a break.

Wherever he goes I'll always see
him as a Steeler.