It was a great night in Pittsburgh as the Steelers kicked off the 2006 NFL season with a solid win. 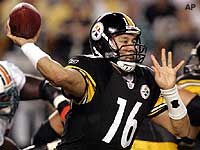 Game Ball: Charlie Batch, Steelers QB, who stepped in for Ben Roethlisberger and showed the entire league what a back-up QB should do. Great game...not flawless...but he got the job done, and did it very well.

Play of the Game: Either Batch's TD pass to TE Heath Miller or LB Joey Porter's interception, which he ran back for a touchdown. 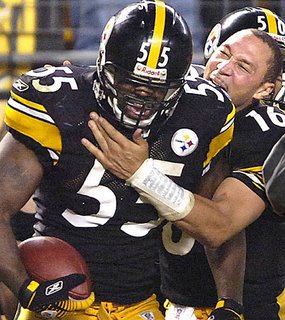 Coaching: A-...some bold moves. They adjusted well after the half.

Running Game: A...RB Willie Parker ran for 115 yards and looked great. Batch also ran relatively well when he needed to do so.

Defense: B...the Steelers did an excellent job stopping the Dolphins anemic running game, but, at times, the secondary was fooled. That said, Porter and SS Troy Polamalu both did fine jobs, making interceptions at key moments.

Special teams: C...they need work. K Jeff Reed missed a field goal, Holmes made some rookie mistakes, and the entire unit allowed the Dolphins to gain too many yards on returns. This seems to be the Steelers' "Achilles heel" right now.

Coach Nick Saban is a fine coach, but was far too hesitant calling for a review of the Heath Miller TD run. That indecisiveness didn't cost Miami the game, but did cost them 6 points.

QB Daunte Culpepper was miraculous just in his presence, having recovered so quickly from a serious injury last season. By the end of the first half, he seemed to find a certain rhythm, but couldn't maintain it. He made some bad throws, and needs to notch up his game a bit if the Dolphins want to make a serious playoff run.

Miami Herald columnist Dan Le Batard is all wrong, however, in his claim that the Dolphins loss isn't all that bad. Any loss is bad. They should not feel good; they should let the loss hurt, and spur them to better results next week.