Looking for the Devil

"Then he began to teach them that the Son of Man must undergo great suffering, and be rejected by the elders, the chief priests, and the scribes, and be killed, and after three days rise again.
"He said all this quite openly. And Peter took him aside and began to rebuke him.
"But turning and looking at his disciples, he rebuked Peter and said, 'Get behind me, Satan! For you are setting your mind not on divine things but on human things.'"

(Mark 8:31-33, NRSV)
In Western society, we have often been preoccupied with the Devil. 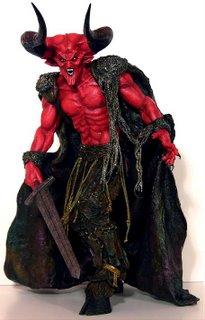 Lots of music has been written about this enemy of humanity, lots of paintings painted, lots of theological works written in an attempt to understand and identify it.

It seems to me that in this passage from Mark (from this Sunday's lections), Jesus is quite clearly identifying the enemy. We don't need to look for the Devil any further than our own mirrors. How often do we frustrate the Holy Spirit? How often do we take the easy road? How many times have we purposely or inadvertently gotten in the way of God's plans? While we are called to be on the road to perfection in love, most of us are not yet there; I'm nowhere near that destination. Inherited sin is still very much a reality for most of us.

If we look for the Devil behind every tree and under every rock, we're going to find it. Instead, we as the Church need to recognize that the enemy which poses the greatest danger isn't the one in Afghanistan or Iraq or "in hell", but rather the enemy that stares back at us while we're brushing our teeth.
at 8:42 AM

Actually, I just got done reading the devil's blog. It can be found here: http://kindlings.blogspot.com/

OK, since we're acting like Christians for a change, I'll oblige.