"I thank my God

This Sunday, which is World Communion Sunday, is a very special day in the life of the Church Universal, for on this day, we will gather at table around the globe and together celebrate the Sacrament of Holy Communion in a sign of unity and a prayer that, someday, the Body of Christ may truly be one, according to the prayer of our Lord in John 17. It is a great day, a day to be treasured and celebrated, a day on which the sacrament truly transcends, and becomes far more than we could possibly realize.

I'll be focusing on Philippians 1:3 in the sermon at Jefferson UMC. This is part of St. Paul's introduction to his letter to the church at Philippi.

As St. Paul gives thanks to God, he uses a wonderfully rich word: "eucharisteo", translated as "thanks" or sometimes "thanksgiving". This, of course, calls to mind the Lord's Supper, which is often (perhaps best) termed "the Eucharist".

We human beings often give thanks with a communal meal. Thanksgiving Day is a hallowed American holiday, and families gather on Christmas Day and Easter Sunday to break bread; friends often do the same for New Year or Independence Day celebrations. The notion of a communal meal is wired into us as humans.

When the Church gathers to give thanks, she, too celebrates a communal meal. But the thanksgiving is far more powerful even than the most intimate of family gatherings.

I recall the television series "Happy Days", which featured a Milwaukee teenager named Richie Cunningham and his circle of friends, the most interesting of whom was "the Fonz", the tough, street-wise, "cool" guy who functioned as a sort of mentor to Richie. 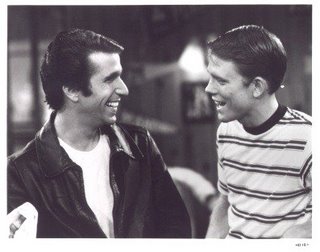 and soon the actor who portrayed Richie, Ron Howard, wanted to leave the series to direct films (such as Parenthood, Apollo 13, and A Beautiful Mind). A tear-filled "goodbye" episode for Richie was quickly scripted, and many Americans were glued to their televisions as the gang bade Richie farewell.

The most heartbreaking scene was the "goodbye" between Richie and his mentor/best friend, the Fonz. The two actors began to cry as Richie said to the Fonz something like, "How do you say 'thank you' to the one who means everything to you?"

Powerful words from a televisison sitcom. How do we say 'thank you' to the One who means everything to us, to the One who has given us new life and hope, who as granted is forgiving and transforming grace, who has blessed us far beyond anything we deserve, who has saved us from the pain of damnation? As Calvinist evangelical theologian Karl Barth wrote in his Deliverance to the Captives, "To be saved does not mean to be a little encouraged, a little comforted, a little relieved. It means to be pulled like a log from a burning fire."

How do we say 'thank you'? Well, in Biblical terms, giving thanks is 'eucharisteo'. We give thanks as the church primarily by celebrating the sacrament which is itself a gift for which to be thankful. We give thanks by faithfully partaking of the bread and the cup and allowing the Spirit - one more time - to renew us for life and for ministry, that tomorrow, we will be more like Christ than we are today.

Here are some Eucharistic resources I've written at one time or another...

"Do This; Remember Me!" (a 2003 hymn drawn from the Biblical institutioal narrative)
"Do This: The Eucharist as a Key to Pastoral Care and Renewal in the Church" (a brief 1997 paper, filled with spelling errors...sorry!)
at 8:31 AM