Game Ball: Steelers Offensive Coordinator Ken Whisenhunt, who did a remarkable job in planning and calling the game; runners-up: QB Ben Roethlisberger, who returned to form, and safety Troy Polamalu, who was everywhere (10 tackles including 9 solo, 1 49 yard int) 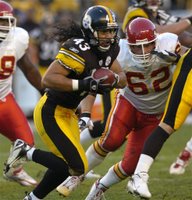 Play of the Game: Steelers safety Troy Polamalu's interception, which sealed the victory; runner-up: WR Santonio Holmes' 50 yard catch/run, which lit the spark for the team

Passing Game: A...some excellent plays by the QB and all the wide recievers

Defense: A+ ...allowing only 7 points, they were solid, even without star linebacker & defensive leader Joey Porter; they kept Chiefs Pro Bowl RB Larry Johnson to a mere 26 yards

Special Teams: B...Holmes did a fine job returning kicks; K Jeff Reed missed what should have been an easy field goal

Chiefs analysis: This is a mediocre team with a new head coach (albeit one with previous head coaching experience). They were led by a mediocre back-up QB. The Steelers looked Super Bowl good...finally...but it was against a mediocre team, and no one should lose sight of that. A solid win for Pittsburgh. Next week, the Steelers play the Atlanta Falcons, which will be a true test.

I gotta give the QB and A+, not just an A. Anytime you complete a QB rating of 158.3 you're not almost perfect, you ARE perfect. It's like achieving quarterback sanctification. It was good to watch Steeler football like I haven't seen in a while.