This weekend, Fox News celebrates ten years on the air. Several news outlets have stories on the anniversary, including USA Today and TIME Magazine.

What can be said with certainity about Fox News? First, without question, it's the highest rated cable news network; as Peter Johnson of USA Today says, "...it has reduced granddaddy CNN to a distant second and NBC's cable news venture, MSNBC, to an also-ran." 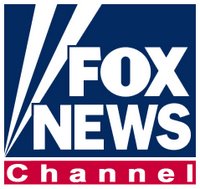 Second, it's commentators by and large definitely lean to the Right...Bill O'Reilly and Sean Hannity being perhaps the most notable of the network's commentators. There are more Left-leaning commentators on Fox News, but, for every Alan Colmes, there are three or four O'Reillys and Hannitys. Third, Fox News' style has has an undisputed impact on TV news...from the "news zipper" at the bottom of the screen to "in your face" graphics to ultra-aggressive commentary. TIME Magazine, in fact, a generally moderate-left publication, talks about these influences quite concisely in its article.

What has been said about Fox News that is disputed? The common charge is that it is, as TIME Magazine phrases it, a "covert Republican shill". Peter Johnson's USA Today article deals with this charge well. Referring to Roger Ailes, the head of Fox News, Johnson writes, "Ailes also says Fox News is probably more conservative than other TV news outlets, but only because it has consistently given equal voice to people whom mainstream media traditionally ignored if not disdained: conservatives. Liberals 'hate us for coming on the scene and changing the game and making people look at both sides of issues,' he says."

While the commentary on Fox News is, as I've stated, generally right-leaning, the news coverage, in my view, tends to be, as the cliche goes, "fair and balanced". While journalists like Brit Hume and Chris Wallace may indeed lean to the right (I've really no idea), their coverage tends to be pretty fair. It was Fox News, for example, that broke the story in 2000 a few days before the Presidential election that years ago, George W. Bush had been pulled over for driving while intoxicated.

Given the dominance of Fox News, it's no wonder that CNN and MSNBC are envious, and the Left is disgusted by the network (witness Bill Clinton's recent assault on Chris Wallace for doing his job as a journalist by asking legitimate, tough questions). Folks like MSNBC's Keith Olberman (a fine sports broadcaster) reek of jealousy and nastiness toward the people of Fox News.

All in all, Fox News is a quality news organization. While I very often disagree with its commentary, it usually presents the news well and, even when I disagree with O'Reilly et al, I find them entertaining and informative. It is a fine alternative to the more lazy, one-sided view often presented elsewhere.

In the interest of full disclosure, I took this online test found on Alan Colmes' web site...

Fox News is a far right organization, and with few exceptions, does not really qualify as "news." It's more conservative commentary on the news than actual news. Anyone who depends on Fox for real news is a fool. It's like watching the Daily Show for your news. It just isn't news.

CNN , particularly since 1992, has been very moderate in its coverage. Still the best for pure journalism.

MSNBC is also more of a commentary channel, atleast in primetime, though it csn not be classified as right or left (Olberman is largely modertae, but very anti-Bush; on the other hand, Pat Buchanan is a political consultant).

CBS' Dan Rather debacle virtually killed network news. It wasn't so much biased journalism as just plain bad journalism. It was the nail in the coffin.

The NY Times continues to get hammered by the far right as being liberal, but I've seen no real proof positive of that.

Here is a funny excerpt from a presidential news conference, during which the Prez makes a little joke about the NY Times and gets some laughs...his body language is hilarious.