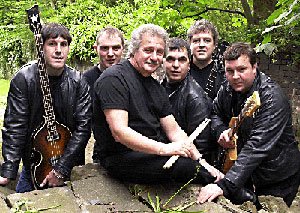 Pete Best was the drummer for the Beatles in their early, formative years, while they were playing in the Cavern in Liverpool and playing 8 hour sets, 7 days a week in Hamburg, Germany. He was fired by the band and their manager Brian Epstein in 1962, when they were signed to a recording contract. The far more inventive Ringo Starr was his replacement. Pete Best labored in obscurity while the Beatles went on to worldwide stardom and acclaim.

I'm happy to say that Pete Best's ship finally came in the in mid-1990s, when The Beatles Anthology series of CDs was released, featuring several recordings the band made in the early 1960s with their old drummer. As a result of those recordings, and the success of the Anthology project (all three double CD sets topped the charts upon their release in 1995 and 1996), Pete Best became a millionaire, and now tours the world with his band.

First, the concert was slightly marred because Pete's opening act was scheduled to be Denny Laine, former guitarist for both Wings and the Moody Blues, but Denny was a no show. But when the Pete Best Band took the stage, it was clear they were there to have fun and give a good show. Essentially, as my brother and I quickly noticed, they are a good oldies band with a gimmick...Pete Best being their gimmick.

Pete was one of two drummers and seemed to do a fine job, playing rock and roll classics (such as "Twist and Shout", "Besame Mucho", and "What'd I Say") and a few very early Beatles numbers ("I Saw Her Standing There", "P.S. I Love You", "Hello Little Girl"). He spoke a few times, recalling the early days with "John, Paul, George, and Stuart" (Stuart Sutcliffe being the Beatles' original bassist, who left the group and died before their fame), and the Liverpudlian band gave the audience a good show.

Surprisingly, thousands of people turned out for the concert on the lawn, and a good time was had by all. It's probably the closest I'll ever get to seeing an actual Beatle.

I once saw Jefferson Starship in a similarly obscure venue; it was their first tour after Grace Slick's most recent drying-out period, and for some reason -- possibly to warm up before going back to real audiences -- they played at Shippensburg. Grace sang a strange disco version of "White Rabbit," in a rather wooden rendition that suggested she was completely sick of the tune.