The news is filled with stories of the Gulf Coast region, a year after the hurricane which devastated the region. Some stories seem accurate and meaningful; others are political first, news second. That's the problem with the "Big Media" in America today...the reporting of the news accurately suffers as political agendas (likely on both sides of the aisle) become primary. 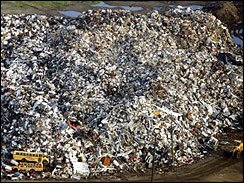 Neither official stepped up prior to the storm or in its immediate aftermath; both are complete failures as leaders whose errors cost lives and billions of dollars in damage. Nagin, demonstrating his complete lack of leadership integrity, has spent a good part of the last year blaming others (the state, the Feds, whomever else seems convenient at the moment) for his mistakes, sometimes using racist tones. Horrible stuff. It was the job of Nagin and Blanco to evacuate and then to oversee relief and rebuilding; judging by the trash still evident in New Orleans, the fact that half the population of the city hasn't returned, and that the city is in general disarray, these two people should retire.

* FEMA...the response seemed chaotic. I'm not sure who in this department is precisely at fault; likely there are several people, including former director Mike Brown. It was shocking to see how slowly FEMA jumped into action.

* President George W. Bush...overseeing a disaster like this isn't his job, but he made some costly political mistakes throughout the tragedy. Columnist Fred Barnes does a fine job of detailing these mistakes here. The president, admittedly preoccupied with the War on Terror, seemed out of touch with what was happening along the Gulf Coast. Fair or not, the perception of his slow reaction cost him support and will likely cost the GOP Congressional seats come November.

* The "Big Media"...the reporting of the hurricane's aftermath in New Orleans represents the nadir of American journalism. Reporters were so eager to get stories that they stretched the truth and at times seemingly fabricated horrific tales of mass rapes and murders. No major network was spotless in this regard. All seemed eager to spin politics at the expense of accuracy. ABC, CBS, CNN, FOX, MSNBC, and NBC...shame on you. You diminished yourselves and journalists everywhere.

* The New Orleans Saints...as a team, they usually look bad, but, if I were a betting man, I'd bet that they move sometime in the future, possibly to Los Angeles.

* Politicians Everywhere...so many wanted to turn Katrina into something for their political gain; many are still doing this. Shame on all of them.

* Mississippi Governor Haley Barbour and Florida Governor Jeb Bush...both did an exceedingly excellent job throughout, and both their states have been rebuilt far more effectively than in Louisiana. Granted, neither had a major problem like New Orleans on their hands, but both have served as models of what to do and what not to do when this kind of disaster hits.

* The Relief agencies...such as UMCOR (United Methodist Committee on Relief), the Salvation Army, Catholic Charities, Church World Service, and the many other agencies and church groups which raised millions of dollars and, just as importantly, sent teams of folks to the afflicted region to help clean up and rebuild. Praise the Lord for all who helped in any way; the area would be far behind where it is without the help of these kind people.


Let's try and do better as a society the next time a disaster of this magnitude strikes. And let us continue to pray for those afflicted.

To help with the Katrina Church Recovery Appeal, click here.

Here's an example of the "Big Media" during the tragedy...an ABC reporter desperate to get some citizens to diss the president, but failing to get what he's looking for...

UMCOR is being recognized for its work.