On this date in 1965, Bob Dylan released his classic album Highway 61 Revisited. 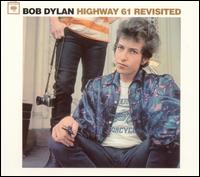 It is generally considered to be among the Top 10 Greatest Albums in the rock and roll era, probably Dylan's best work, and a landmark in folk rock.

US Highway 61 travels from New Orleans through Memphis to Canada, and Dylan used it as a metaphor for American life. According to critic Robert Shelton, "...as a teenager, Dylan had travelled that way on radio. ... Highway 61 became, I think, to him a symbol of freedom, a symbol of movement, a symbol of independence and a chance to get away from a life he didn't want." Though firmly "folk rock", the album has a very bluesy feel.

The album begins with "Like A Rolling Stone", one of rock's greatest records. Absolute perfection, musically and lyrically. Dylan's only #1 hit, few records in the past 50 years can compare in terms of sheer excellence (the Beach Boys' "Good Vibrations" and maybe a Beatles single or two, not much else). The song blew away John Lennon and Paul McCartney, and influenced scores of other musicians, including Michael Nesmith, the Rolling Stones, Bruce Springsteen, and Frank Zappa.

The album continues with one great song after another, such as "Tombstone Blues", "It Takes a Lot to Laugh, It Takes a Train to Cry", "Ballad of a Thin Man", and the title track, before finishing with the astonishing "Desolation Row", one of the most ambitious songs ever written, a bleak and bizarre vision of America.

Highway 61 Revisited is a work that should be heard repeatedly by music lovers everywhere. It's one of my personal favorites; I often listen to it in the car during a long drive. I commend it to one and all as one of the best works by the best American songwriter who ever lived.