The big news in the past few days (other than Israel/Lebanon) has been that British security forces arrested two dozen men who are believed to have been plotting a terrorist attack using airplanes leaving Britain bound for the United States. Praise God that this plot was halted.

The real test of the success of the U.S.A.'s so-called "War on Terror" has to be this: has there been another attack by terrorists on U.S. soil? The answer is a definitive: no. This is why I am grateful to and for two good men. 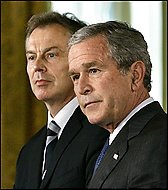 That said, I believe both men to be honest men of personal integrity. No evidence has been presented to even suggest anything else.

Now, many folks disagree with - strongly - their politics, and that's fine. When critics attack President Bush or Prime Minister Blair personally, though, that reveals far more about the critic than about these two world leaders.

The fact is that America has not experienced another "Sept. 11". We may yet go through that nightmare again. But to date, we have not. As we approach the fifth anniversary of the tragedy that will in many ways define my generation to history, I am grateful. As President Bush and Prime Minister Blair have pursued an unpopular war against terrorism, they have endured scathing criticism - some justifiable, some of a more personal nature quite unfair. They have watched their popularity decline and their political futures vanish (this is particularly true in the case of Prime Minister Blair, who is not limited by term limit laws as is President Bush).

Yet, despite the criticism and at times meanness of their opponents, they have stood fast. They have declared to the world, "These are the principles we hold dear. This is what we believe in. We will not waver." This they do while maintaining their personal integrity and enduring hateful attacks. This is, of course, a lesson for all of us in Leadership 101.

We have not experienced an attack on U.S. soil since 2001, and that is largely because of the leadership of President Bush and Prime Minister Blair. Agree or not with their policies, this truth is reality.

Amen on every point. I think we need to look through binoculars turned backwards and not a microscope at world issues.

They are doing an incredible job. I am so thankful they are in leadership.

I have seen nothing to realistically suggest that W is a man of integrity. He has brought shadiness in the White House to a new level. He has systematically divided the people of our nation and I beleive will be viewed by history as an abysmal failure for his shocking lack of leadership.

You make no mention of attacks in other free nations, such as in Spain and in the United Kingdom, which have indeed cut short many lives of innocent civilians. Just because we haven't seen something to the scale of 9/11 on US soil doesn't mean terrorism has gone away.

Indeed, it was the policies of the Prime Minister which made the United Kingdom a target for a terrorist attack last year. Bush and Blair have not made us safer; they have made us a vulnerability.

To Kevin...
there hasn't been any evidence cited by anyone to suggest that the personal integrity of either President Bush or Prime Minister Blair is to be questioned. Their policies? Sure. But not their personal integrity, which, to date, remains firm (unless, of course, dirty little secrets emerge in years to come). Hate the sin but love the sinner...hate the politics but love the politician.

To Richard...my post was very "McIlwain-centric", which means that while there have been terrorist attacks elsewhere in the world, my kids have been safe; it's certainly appropriate to be thankful for that, even while feeling badly for those who have not been as safe. I also don't think terrorism has "gone away", nor that there won't be other attacks, even on U.S. soil, but, to date, I feel blessed that my children are still with me. Whether or not Prime Minister Blair and President Bush have actually increased our vulnerability to terrorism is highly debatable; we seemed pretty vulnerable on 9/11/01, prior to the American-British engagement in the "War on Terror", and, again, the U.S. hasn't been hit on our soil since then.

There is plenty of evidence to question W's integrity to ant discerning peron. Only those who blindly follow him refuse to see them. His lies are vast and documented. Saying he is a man of integrity does not make it so. Wishing it won't work, either. Just the facts, ma'am. Just the facts.

Paranoia never helps. There's no evidence of lying on the part of President Bush, just wishful thinking by those more driven by hate than truth.

One who sees W's lies does not make that person paranoid or full of hate any more than those who refuse to see his lies are Kool-Aid drinkers. Name calling folks who disagree with you won't change the facts...we don't have a good man in the White House. Let's just look forward to 2008 and hope that we can get one then.

Again, no one has cited any evidence of the President's (or the Prime Minister's) lack of personal integrity; there's just been a lot of wishful thinking on the part of those who, for their own reasons (which are likely many), desperately want the personal integrity of these two men to be lacking. But lack of evidence brings us back to square one...we can disagree with their policies, but respect their obvious personal character.

You are (intentionally?) ignoring some fairly profound and damning evidence regarding W's character. That may make it easier to fit everything in to your world view, but as I've said, the facts don't lie. W has brought lack-of-integrity in the White House to an all-new level. Many thought Clinton was bad re: personal integrity...but after Clinton we were all in for 8 years of you-ain't-seen-nothing-yet! W gives Nixon a run for his money. Facts don't lie, no matter how hard you try to ignore them.
Also for the record, I have never lumped Blair in with W on the issue of integrity. Blair deserves better.

To question a man's personal integrity with no evidence is pretty rough. If there's evidence, why isn't anyone presenting it? No one seems to be talking about it. Why? Perhaps because there's nothing to question.

Now, his policies are another matter. Those are certainly open to debate, and several are woefully questionable.

But the guy's been pretty straight forward in terms of his personal integrity, and no one, even his opponents, have questioned that.

Yes, Bill Clinton's integrity was obviously challenged, and he demonstrated that there was good reason for that. Even folks who liked Bill Clinton's policies don't really support his personal integrity. It's just the opposite for President Bush, it seems.

Actually, that's not true. Democrats, liberals and moderates have raised the issue of W's integrity over and over again. However, W's party controls all aspects of government and simply brush it aside. Now, if the Dems gain contriol of one house of Congress this Fall, and therefore gain subpoena power, then all bets are off. But there is more smoke for W than there has been for any president since perhaps Nixon. t bears looking in to, unless W and his party is afraid of something.

His policies and political decisions are another matter. They have been questioned, strongly, and properly. I think you've missed the point of this blog post.