What a tangled web we weave...

President Bush has demanded that Iran release the British sailors being held by the Iranians for an alleged security threat.

The question comes to mind whether or not President Bush has the moral authority at this time to make such a demand. Though I have serious disagreements with him, 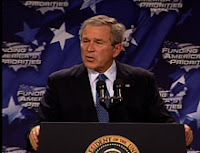 I like the president and believe him to be a well meaning man and a sincere Christian trying to do his best during excruciatingly difficult times.

But, we have kept prisoners at Guantanamo Bay for years, held as alleged security threats. I have no doubt that at least some of the Gitmo prisoners are terrorist combatants; I also believe that the British sailors were likely just in the wrong place at the wrong time, and that the scary Iranian leadership is using this situation (and these sailors) as an excuse to further its own bizarre ends; I am reasonably certain that Iranian president Mahmoud Ahmadinejad is a lunatic.

Still, President Bush has made some questionable decisions which have now resulted in at least ethical ambiguity, and potentially a complete lack of moral authority.

Mind you, I don't believe the two presidents to be morally equivalent. But I also believe that President Bush has put himself in an awkward situation by blurring the ethical lines in Gitmo, and now in the odd position of denouncing the same act when it's committed by someone else.

Of course, for me this points out the strange and inconsistent road that is "just war" philosophy. First we make one compromise, then another, and, before we realize it, we're even violating "just war" principles by demanding "unconditional surrender", dropping atomic bombs on civilians, or holding prisoners indefinitely, without any resolution in sight.

Almighty God, kindle, we pray, in every heart the true love of peace, and guide with your wisdom those who take counsel for the nations of the earth, that in tranquility your dominion may increase until the earth is filled with the knowledge of your love; through Jesus Christ our Lord, who lives and reigns with you, in the unity of the Holy Spirit, one God, now and forever. Amen. (Book of Common Prayer)

There is no moral equivalance between what Iran is doing with hostages and what we are doing at Gitmo. Firstly, the red cross has an office inside of the prison and Gitmo and prisoners are being treated in humane fashion. We have not paraded our prisoners in front of cameras and forced public confessions from them as the Iranians have done.

Second, there is the idea of due process. Terrorist combatants will ultimately be judged by military tribunals where they will have the right to legal representation. I ran has summarily convicted the British sailors and is holding them with no guarantee due process will be followed.

Third, how do the British sailors even know that they were in Iranian waters. The commander of the British ship was not taken and only he and those who navigate the ship would know its exact position.

Lastly, beware of the sword of Islam. Throughout history they have settled all disputes in battle. They will not rest until the infidels are either converted or destroyed. Name one peaceful and rational Islamic government.

Also, did you see the special about Islam in Great Britain on CNN? The muslem population is the fastest growing segement in both England and France.

Call me anytime for a discussion on geopolitics and comparative religion. I believe you can still be converted...Thoughtful post.

I'm no expert on Islam, so I can't really speak to that. My view is that the best antidote to violence in any religion is the gospel of Jesus Christ.

I'm not sure that the Gitmo prisoners have gotten due process. To be sitting for years without a trial seems unfair and unjust to me; bring up charges and try the prisoners or let them go. Iran may indeed soon put the sailors on trial, and it may not be a fair trial, but that doesn't excuse the American delays of justice.

Yes, the British sailors are being used, no question.

But my point is that President Bush, like many U.S. presidents before him, has made so many ethical compromises that he may not still have the moral authority to make these kinds of demands.

You have a good point. That's why we elect a new one every four years. Bush has definitely lost his way and because of that America has lost the moral high ground. Good point on Gitmo.