Today, I attended the Henderson lectures at Pittsburgh Theological Seminary. This year, 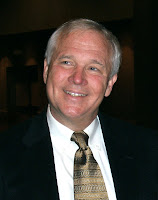 the speaker was Bishop William Willimon of the North Alabama Annual Conference. He was Dean of the Chapel at Duke for 20 years, was named one of the 12 most effective preachers in the English-speaking world by a Baylor University study, and is the second most widely read writer by mainline pastors according to a Pulpit & Pew study.

Bishop Willimon is one of my primary contemporary influences, and it was great to hear him talk about "The Miracle of Preaching". Before his third (and final) lecture, Dr. John Burgess of PTS made the claim (with which I agree) that the 1989 book Resident Aliens, which Bishop Willimon wrote with Stanley Hauerwas, is one of the most significant Christian books of the last twenty years. I highly recommend it as a nice, simple intro to the work of both men.


Some of my notes from Bishop Willimon's presentation...


The modern world has a stake in keeping God silent.

We preachers don't like to admit that God has given us power; the preached Word is God's Word.

Preaching is a debilitating activity; preaching is hard, and most of your work is invisible.

The difference between a living God and a dead God is that the dead God will never surprise you.

God constantly reassures us, saying, "Hey... don't worry - you've got a college degree, it's North America, it's the twenty-first century, it's the Bush Administration - by comparison, anything you share will be good news."

We are in the business of teaching people a new language - the gospel.

In spite of Robert Schuller, self-esteem is not the same as salvation.

Our trouble began when we were no longer called preachers, but pastors, and our job became more therapeutic than proclamatory.

He went into an extended critique of Rick Warren and Joel Osteen and what he referred to as "power point preaching". He wasn't opposed to the technology as much as the style of preaching which usually accompanies these presentations, which he identified as sermon series' on "How to Cope" or "Principles for a Fulfilling Life". The Bishop felt that this kind of preaching reduced the gospel to a few simple principles and emptied it of its countercultural power. He felt it was too accomodating, too American middle class, and had little to do with the crucified and Risen Jew named Jesus. At one point, I whispered to a friend, "Bishop Willimon's been reading my blog!" Jeff Vanderhoff did not agree with Bishop Willimon's take on this style.

The preacher is the one who is called to love God more than he/she loves the congregation.

Words we'll never hear from God: "I love you just the way you are; promise me you'll never change."

Keith...is that all you pastors do anymore is attend lectures? Did you get your picture taken with him like you wanted? But seriously...glad you are trying to broaden your horizons.

Didn't get a pic. This was a good two days of continuing ed. And it was great to get a strong UM presence at PTS.

I enjoyed the lecture from Bishop willimon, and found it thought-provoking and challenging (although as Keith mentioned, I didn't agree wholeheartedly with his point of view!) I think he took a rather narrow view of "Power Point Preaching" and attacked some of the shortcomings associated with that style of preaching, but did not give a fair perspective of the value and positive aspects that are often there as well. There are a great many Christ-centered preachers who use power point as a tool to proclaim the gospel in meaningful and relevant ways. It was a good reminder, however, that ALL of our preaching needs to be Christ-centered, no matter what style we use or what visual aids we employ.

After Jeff left, the Bishop also denounced card tricks and magic tricks as "sorcery from hell" and "stuff the devil uses to trick you into sin". Loud choruses of "AMEN" were followed by Jeff's picture appearing on a power point screen. A prayer vigil followed.

Thank you for posting this.

I recently shared my copy with a friend who came to UMC from a background of pentacostal and fundamentalist leaning churches. (As opposed to my background of college campus Unitarianism)

My friend said we mainliners have always left him totally confused.

"Loud choruses of "AMEN" were followed by Jeff's picture appearing on a power point screen."
So he DOES use power point!

I don't know if you read Leadership magazine or not, but there is an article in there this time by Brian McLaren. The point of his article is that when we live reactively we risk a sick soul and a soul ministry.

When we react strongly against some person, some ministry,or some way to reach people it has a deteriorating affect on our soul.

It's unfortuate that when a group of pastors and leaders gathered together they had to hear a reaction against a style of worship and leadership.

When I go to a conference I don't want to hear what the person stands against, I want to learn what is working to build the Kingdom.

Again, the Bishop wasn't opposed to the tool of power point as much as the style of preaching that often accompanies power point which, in his opinion, reduces the gospel to a few simple principles and prevents a real encounter with a very real, very dangerous God.

Wow, what a generalization - style of preaching that often accompanies power point! You have to be kidding me that you would buy into that kind of thinking.

Statistically, he's correct. Again, his problem isn't with the tool of power point. It's with the reduction of the gospel to "Five Principles to Make You Happy" kind of stuff. He felt that this style is an accomodation to materialistic suburbia, rather than a call to a subversive lifestyle.

Send me the statistics.

Obviously I show some bias because that is my style of preaching, but I still maintain that this style does NOT reduce God to a few slick slogans or catchphrases. Rather, it is aimed at meeting people where they are, and showing them the bridge that leads them to a relationship with Christ that is meaningful and relevant. Because I like this style, I also listen to a lot of PP preachers (Rick Warren included), and have seldom, if ever, heard them not focus on Christ in the sermon. This style STARTS in the world in which we live, but ENDS in the Kingdom of God. It seems to remind me of another bridge builder that I've studied, someone who used to use something called parables to do the same thing. I don't agree with Bishop Willimon's stance that PP preachers "often" reduce the gospel to something less than it is. As a matter of fact, I would bet that the 5 point outline he gave as an example from rick warren, if we had the full sermon and not just the 5 point outline - we would have seen a very Christ-centered sermon that did lead people to God. Unfortunately, we were only given a narrow glimpse which can easily be taken out of context.

Jeff, I agree that those kinds of sermons can still be Christ-centered, and I'm obviously reluctant to clarify on behalf of Bishop Willimon and risk misrepresenting him. But I think his point was that we (suburban, affluent, white males) have in many ways adapted the gospel in order to soften the blow of its more inflammatory side (such as this or this or this or this or this). By using the pulpit for "5 Easy Steps to a Happy Life" or "8 Ways to Whatever", we are accommodating our materialistic "me" culture, helping folks to cope and "get by" with smiles on their faces, rather than presenting a gospel which is often offensive, asking us to change the way we live or think or spend money or spend time, a gospel which is largely a rebuke of our materialistic "me" culture.

Of course, I write these words as someone who, like you, lives in white, affluent suburbia.

So, the question is: How do we preach a gospel which doesn't drive people away while still tending faithfully to the difficult parts? In Bishop Willimon's view, he's concerned that too many "power point sermons" adapt the gospel and accommodate to the culture.

Now, my view is that one doesn't have to adapt the gospel itself, using power point or any other tool. Present it honestly and faithfully...some will be drawn, others will run away. That's up to the Spirit and the induvidual. In my own experience, many (not all) "power point sermons" have been "theologically lite"...not just the sermons, but much of the worship, too. There are exceptions, of course. But by and large, that's been my experience, and, apparently, Bishop Willimon's as well.

Hey, look at Adam Hamilton out in Kansas City...he's not "lite" or anything, and he uses power point very well, and also does many sermon series. But not everyone is Adam Hamilton.