The Business of Forgiveness

"On the evening of that day, the first day of the week, the doors being locked where the disciples were for fear of the Jews, Jesus came and stood among them and said to them, 'Peace be with you.' When

he had said this, he showed them his hands and his side. Then the disciples were glad when they saw the Lord.

"Jesus said to them again, 'Peace be with you. As the Father has sent me, even so I am sending you.'

"And when he had said this, he breathed on them and said to them, 'Receive the Holy Spirit. If you forgive the sins of any, they are forgiven them; if you withhold forgiveness from any, it is withheld.'"
- John 20:19-23 (ESV)
We read of an incredibly powerful and important Christian practice in this brief passage from John's Gospel. Jesus has commanded his disciples to be about the business of forgiveness. We are to be a forgiving Church; we are to proclaim the assurance of pardon.

Evangelical Christians have traditionally been very good at talking about penitence and the need for confession of sin. We have not always been as effective at offering real forgiveness and, more than that, assuring a penitent sinner of forgiveness.

The truth is that we need this liturgical practice in the Church; it is, according to Jesus, an important part of who and what we are as his disciples. As we see in John 20:23, the authority to forgive sins was intimately connected from the very beginning of the Church with the reception of the Holy Spirit. Additionally, Good Friday and Easter are bound up with the proclamation of forgiveness, for Jesus said that, "...Christ should suffer and on the third day rise from the dead...that repentance and forgiveness of sins should be proclaimed in his name to all nations." (Luke 24:46-47, ESV)

And yet many Christians - even faithful Christian leaders - are hesitant to offer forgiveness and declare that a person is forgiven, afraid that we might step on the toes of the Almighty. Forgiving sins is, to be sure, inherently the prerogative of the Father, which he subsequently shared with the Son. Jesus, in turn, granted this authority to his disciples. Indeed, declaring forgiveness is one of the most apostolic acts we can perform.

Our United Methodist liturgy has a wonderfully simple act for Confession and Pardon, adapted (as is so much of our liturgy) from The Book of Common Prayer, the finest English language liturgical resource on the planet next to the Bible. 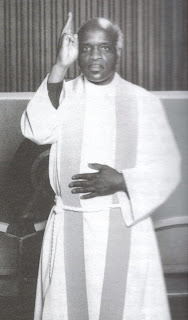 a corporate confession of sin, the pastor is directed to lead in this powerful exchange...

This is no relic from an archaic institution; it is an incredibly meaningful act to say to a person, "In the name of Jesus Christ, you are forgiven!" Often, this declaration can mean the difference between an unsound religiosity and an authentic experience of the transforming grace of God.

It is important for Christian leaders (esp. clergy) to be ready to offer and declare forgiveness in Jesus' name to any penitent sinner on an individual basis, to be sure. Some of the most momentous pastoral moments in my own experience have been with persons nearing the end of their lives in this world, who tearfully and warmly receive the assurance that they have indeed been forgiven.

But let us not abandon the corporate confession and pardon; we are, after all, redeemed as a community of faith, not as individuals of faith, as parts of the living Body of Christ, not dismembered pieces of a corpse. Personally, this simple liturgical act is one which I cherish as part of my own pastoral leadership, and am extremely humbled each time I offer forgiveness on behalf of Our Lord, and am quite moved when I am subsequently forgiven by the congregation in Jesus' holy name.

I am encouraged by the Don Imus incident (making racially insensitive comments on his radio show) that forgiveness can be real. He apologized in a contrite and public manner and has even agreed to meet with the Rutger's women's basketball team (about whom he made the remarks). The team says they will hear and accept his apology.

The event has made forgiveness, at least for a moment, part of the national conversation. What is disturbing is that many refuse to extend him forgiveness, still calling for him to be fired.

What makes forgiveness real is reconciliation. Without attempting to rebuild fractured relationships, we reduce forgiveness to a mere idea.

I am still hurt by the fact that so many of my relationships from my former congregation have not been reconciled. I have forgiven them, but I don't know if they've forgiven me. The conversation ended when I left.

So I ask the question: How do we make the act of forgiveness go beyond our walls and into our lives? I'm still struggling with that!

I was intrigued by your comment: "What makes forgiveness real is reconciliation."

I have always maintained that there is a difference between forgiveness and reconciliation. In the human relationship, forgiveness can be offered even when the offending party has not repented (see Christ on the cross).

Reconciliation, however, requires both forgiveness AND repentance.