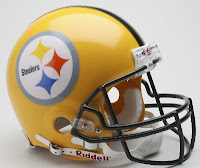 great day has arrived; it's Christmas in April! On my 13th annual celebration and "personal day", Robyn and the kids went to visit my in-laws for the day, and I have had my four-alarm chili and breadsticks for every meal so far. I already feel sick; life is sweet!

The draft began with the two most poorly run teams in the NFL making their picks. The Oakland Raiders, run by owner Al Davis, selected LSU QB JaMarcus Russell, and the Detroit Lions, run by retired player Matt Millen, selected Georgia Tech WR Calvin Johnson. Both Russell and Johnson have the makings of excellent players, and Johnson has everything needed to become perhaps the best wideout in NFL history, but I have real concerns. These gifted young men are headed for two teams which have killed the careers of other talented players. These teams are so poorly run, so poorly coached, that we may look back at these picks someday as busts. I pray that this isn't the case.

The other big story of the day was that Notre Dame QB Brady Quinn, whom many had thought might be the #1 overall pick, slid all the way to #22. Initially passed over by many teams, including two which really need help at the QB position (Cleveland and Miami), the Browns traded up to finally obtain him. I believe that the Miami Dolphins, in particular, will really regret this decision to bypass a player who will likely be a very solid passer. At least Quinn was being consoled by a very cute girlfriend...one of the perks of being QB at Notre Dame, I suppose.

the 15th overall pick, the Pittsburgh Steelers selected Lawrence Timmons, an outside linebacker from Florida State. I really like this pick. With good coaching, I think Timmons can develop into one of the NFL's best linebackers. He has the reputation of really disrupting the game (i.e., "being mean") and getting to the opposing quarterback quickly. He also has the ability to play in either a 3-4 or a 4-3 defense, and he'll need that versatility in the Tomlin-era Steelers.

The first round began at noon and ended at about 6:20 PM, making it the longest first round in the history of the NFL Draft.

In round two, the Steelers selected LaMarr Woodley, a defensive end from Michigan. 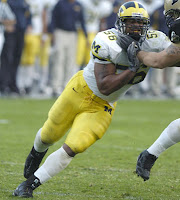 He served as defensive captain on his college team, won the Lombardi Award for Best Defensive Lineman in the nation, the Hendricks Award for Best Defensive End in the nation, and was named the Big 10 Defensive Player of the Year. He's big, strong, and tough, apparently relentless in chasing opposing quarterbacks, and, while the Steelers will convert him to outside linebacker (opposite Timmons), he has experience in the 4-3 defense Coach Tomlin loves.

third round saw the Steelers select Matt Spaeth, a tight end from Minnesota. He was voted his college team's MVP and won the Mackey Award for Best Tight End in the nation. The massive Spaeth seems to be a good blocking tight end, which the Steelers usually love, but can also catch well. His character, team spirit and leadership skills were emphasized by all who have known him, which is great. Presumably, he'll back up starter Heath Miller, and may see a good bit of playing time.

All in all, I think the Steelers did well on the first day of the draft. They picked up two strong defensive players, which points to Coach Tomlin's vision of keeping the "steel curtain" tradition alive. These picks are two extremely aggressive young men. Spaeth looks to be a good fit on offense.

Tomorrow, I'd love to see the team get an offensive back to assist Willie Parker (this year's draft is pretty deep in that area), a cornerback, and some offensive line depth.

Keith...on the Brady Quinn thing. You would have thought the Browns had just won a super bowl the way their local media were behaving. I'm reminded of...Tim Couch. Maybe they should wait until training camp starts before they begin making super bowl plans. I'm not a believer in Brady Quinn...his athletic ability and accuracy has been brought into question by many scouts. He's better than what the borwns have now, but I look forward to the Steelers pounding him to the turf and saying, Welcome to the NFL."

I aim to please!