One of the most important Church leaders of the second millennium was undoubtedly Thomas Cranmer. 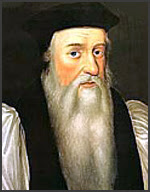 He served as Archbishop of Canterbury during the English Reformation, and was martyred on this date in 1556 by the delusional Bloody Mary, Queen of England.

Archbishop Cranmer's finest achievement was the writing and initial editing of the first Book of Common Prayer, the official worship book for the Church of England. This book is without question the best English language liturgical resource ever put together. In the history of the English-speaking world, only the King James Version of the Bible and the writings of Shakespeare have had a more significant influence on language and culture. John Wesley said of the prayer book, "I believe there is no Liturgy in the world, either in ancient or modern language, which breathes more of a solid, scriptural, rational piety than the Common Prayer of the Church of England."

I use the Book of Common Prayer quite often when preparing for worship; usually, I utilize it each week. In fact, my own personal prayer order is largely adapted from the orders for daily prayer found in this wonderful book.

It is miraculous that 458 years after its initial publication, the words, prayers, and orders in Archbishop Cranmer's masterpiece are not only still elegantly powerful, but are among the most relevant liturgical pieces in the contemporary Church. In fact, I urge everyone to read through the Psalter as found in the Book of Common Prayer; the version found in the prayer book remains the most beautiful ever translated (though the 2004 publication of the Holman Christian Standard Bible, which contains a truly lovely Psalter, gives Cranmer a run for his money).

At any rate, I'm thanking God today for the ministry of Archbishop Thomas Cranmer, who left a rich missional legacy which continues to bless the Church and, through the Church, the world. If you don't own a copy of the Book of Common Prayer (shame on you), you can order a relatively inexpensive copy here, or read it online here.

I thought Bloody Mary was a drink.

You a true child of the reformation...as well as being a gentleman and a scholar. I forgot all about Cranmer. I guess Partee's Church History classes did not have as much of an impact on me as I thought. You inspired me to dust off some seminary books (the one's I didn't already sell on e-bay)and look him up.

He's a great one. Luther and Calvin get all the hype...but Cranmer is really our "spiritual godfather", as he directed the English side of the Reformation, which, of course, produced John Wesley. So, I'm an ENGLISH REFORMATION guy; I told the Presbys at PTS many times what they could do with TULIP and the Westminster Confession.

Amen to BCP & HCSB! I still like
the Psalms in the RSV & now in the
ESV. But the RSV still has a nice
ring to it.

A quote from Thomas Cranmer:

"And as for the Pope, I refuse him, as Christ's enemy and Antichrist, with all his false doctrine."

You admire this man? I hope you admire him in psite of his anti-catholicism, and not (in part) because of it.

In that day, there were many anti-Catholic things said...and many anti-Protestant things said by Rome. I don't agree with everything ever said by anyone, but I give some folks a "pass" due to historical factors.

If someone said that quote today, I'd vehemently oppose and disagree.

You make a good and fair point.

Besides, if Henry VIII hadn't have wanted to get a divorce, almost all of us descended from the English would mostly all be Roman Catholics right now, since there would be no Church of England and most likely no Methodist Renewal movement that grew into the the United Methodist Church.

The Roman Church of Today still holds that you are saved only in as much you believe and adhere to the Doctrines of the Roman Catholic Church. That part has NOT (sadly) changed one iota.