Our oldest son Christian has had a dream for years now...to perform in a musical. Both Robyn and I took part in musical productions in high school and had great fun; Robyn also performed in college and later choreographed a community theater production. Knowing how much fun we had, and admiring the very talented people who perform so well, Christian couldn't wait to be a part of a show.

I'm thrilled to say that last week, Christian was able to fulfill this dream. 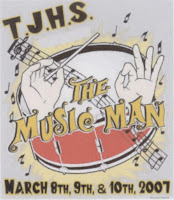 He was part of the barbershop quartet in The Music Man, staged by Thomas Jefferson High School . He sang the high tenor part (likely for the last time) and did a fine job with his lines, his singing, and his dancing. Most importantly, he had a wonderful time.

I'm very proud of Christian, who was recently inducted into the National Honor Society and overall has done very well both academically and in his musical pursuits (in addition to singing, he also plays trumpet in the marching band, concert band, and jazz band). He's also a pretty good kid with a good head on his shoulders (most of the time!). It really is one of the biggest joys a parent can have, though, to see a child fulfill a dream. I'm so happy for him, so proud of him, and so thankful to our Heavenly Father for this blessing.

Next on Christian's agenda will be getting a job (it looks like two interviews this week) and getting his driver's permit; please pray for us!

You have much to be proud of!!!

Thats great, when i was in High School I auditioned for the same part. Unfortunately I didn't get it (even though I was dating, and later married, the student director). I look forward to the days when I will see the dreams of my daughter coming true. You truly are blessed.