Once upon a midnight dreary...

Why Christians Should Celebrate Halloween,
Part 1:
A Holiday History

In ancient times, a grand celebration was held to remember the coming of salvation into the world. A god had been born as a human baby, enfleshed in the very stuff of creation, and had brought with him hope, joy, and rebirth.

Eventually, this holiday, marked on or near the start of winter, was celebrated with wonderful feasts, the exchanging of gifts, lovely music, and the lighting of candles.

The holiday, known originally as "Saturnalia", became better known as "Dies Natalis Solis Invicti", or "The Birthday of the Unconquered Sun God", and was one of the most anticipated days of the Roman year. Families would gather and celebrations would extend from the temples to the homes of kinfolk. It was, by all accounts, a wonderful day.

Years later, with the spreading of Christianity throughout Europe, people who had come to accept the Lordship of Jesus Christ were reluctant to abandon this lovely celebration. After all, family gatherings and giving gifts to children were good things, and surely the Church could affirm these practices. Indeed, the Church could have, should have, and did. Soon, the pagan celebration of the sun god was syncretized with the traditions of Matthew 1 and Luke 2 to create the holiday we now celebrate as, of course, Christmas. This blessed day, thoroughly Christian, has distinctly pagan roots.

Easter comes to us in similar fashion. The name of this, the most important day in the Church year, is derived from Eostre, an ancient sun goddess of the Anglo-Saxons whose rebirth was celebrated in spring, at roughly the same time as the Jewish Passover and the Resurrection of Jesus. The name itself is strikingly similar to related figures in other Indo-European mythological traditions, such as Astarte (Canaan), Eos (Greece), Ishtar (Babylon), and Ushas (India), and even the Hebrew Esther. Upon the Christianization of Britain, the Resurrection was commemorated each spring and quickly adopted many of the symbols associated with the pagan celebration, such as feasting, rabbits, and eggs. This holy day, thoroughly Christian, has distinctly pagan roots.

Among the last Europeans to be converted to Christianity were the Celts of Scotland and Ireland, who celebrated a holiday known as Samhuinn (Scotland) or Samhain (Ireland). Essentially a New Year's harvest festival, it was the time when the gathering was complete and the people were ready for winter. It was also a bit frightening, for it was the one night of the year when the veil between this world and the "otherworld" was lifted; ghosts, the undead, and all sorts of terrible creatures might roam free, bringing with them terror and potential disaster. To ward them off, people carved scary faces into turnips, hoping to scare the evening ghouls. 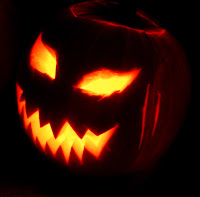 As a form of protection, some folks dressed as creatures of the night (a practice known as "guising"); children were sometimes given sweets and treats to keep them calm.

Samhuinn/Samhain practices became associated with All Saints/All Souls celebrations, just as Christmas and Easter had adopted pagan concepts. In the 19th century, Scottish and Irish families began emigrating en masse to the United States, and they brought many of their traditions with them, which were soon Americanized and largely softened. By the mid-20th century, Halloween was a major American holiday, many of its pagan roots transformed into more "kid friendly" practices such as trick-or-treating or the carving of Jack O'Lantern pumpkins.

In upcoming posts, I plan to look at the reasons Christians should celebrate this great holiday we call Halloween. Issues of Biblical faith, racism, and incarnational ministry will be on my agenda. This post establishes some of the historic background I'll be working from. Much of this information comes from research for sermons, teaching opportunities, or presentations past. I love Halloween, and hope you do as well.

Sources:
Bannatyne, L.P., Halloween: An American Holiday, An American History. 1998.
Bourke, Joanna, Fear: A Cultural History. 2006.
"Christmas." Encyclopædia Britannica. 2007.
Hutton, Ronald, The Pagan Religions of the Ancient British Isles: Their Nature and Legacy, 1993.
Kelly, Joseph, The Origins of Christmas. 2004.
MacMullen, Ramsay, Christianity and Paganism in the Fourth to Eighth Centuries. 1997.
Tighe, William, "Calculating Christmas". Touchstone: A Journal of Mere Christianity. Dec 2003.
Uselton, Bill, Trick or Treat: The History of Halloween. 1997.
Venerable Bede, On the Reckoning of Time.
at 10:14 AM

Hallowe'en is not a holiday of any kind in europe (UK; Germany, France or Finland where I live) so I'd be really interested as to why it became so big in the USA and why (other than for commercialism) it's being exported over to europe. I don't think it's got more than a tenuous link to Christianity and has only pagan roots.

Halloween has become very commerical, but when I was a kid it was a huge deal and almost no one bought costumes. There were not stores full of Halloween decorations.

I think commercialization is a late comer to the Halloween party. As are all the pesky adults trying to turn it into some sort of sex and booze event.

It may have pagan roots, but when I was a kid it was the one night a pack of my friends and I were allowed to go roaming around the streets at night. And we got candy in the bargain. What was not to love?

I agree with John. I think that the best aspect of ancient paganism is its earthy, elemental, childlike response to the wonders of nature and human life...kind of like the Elves and the Hobbits in "Lord of the Rings." What I remember (and enjoyed) about Halloween as a child is running around in the cool autumn air with my neighborhood buddies, lighting bonfires and staying up all night, and celebrating.

To me, it's the commercialism (and not the paganism) that the church should resist in holidays like halloween.

You continue to bless me with education...thanx

so Keith, is it fair to summarize the thesis of your argument like this:

Please clarify any misconception or unintended distortion of your thesis for me. I want to be sure to read the coming blogs with the right framework. Thanks.

Joe - Sort of. Christmas and Easter both have pagan roots, but were claimed by the Church and transformed into Christian celebrations. I plan to post reasons why we should do the same for Halloween, and address some reasons why some have been reluctant to do so.

Did you hear what happened to the guy who couldn't keep up payments to his exorcist?

This is pretty much a non-issue for me. I'm far more concerned about the Santa-fication of Christmas than I am about what I perceive to be a cathartic highlighting of the macabre.

Nevertheless, I appreciate your willingness to share with us your passion and conviction on the matter.

I leave you with one final profundity:

I read recently about a mummy who is very interested in the music industry.

He wants to become a wrap artist.

I must go now. Rod Steiger is coming over to bless our house (too many flies in this place).

By the way, have you checked the children?

thanks Keith, i look forward to the rest of your blogs.

I'm looking forward to further posts in this series.

Why we should celebrate Halloween? So daddy can get candy!