It's No Fun Being An Illegal Alien

little over a year ago, Elvira Arellano, an illegal immigrant from Mexico, took refuge in Chicago's Adalberto United Methodist Church with her 8 year old son Saul, who is an American citizen. Ms. Arellano sought "sanctuary" rather than be deported. Several days ago, she left Chicago to participate in an activist event in Los Angeles, where she was arrested. I believe (but am not entirely certain) that she has already been deported to Mexico. The UMNS news story can be found here.

The debate over immigration, particularly regarding those who enter the United States illegally (as Ms. Arellano did a decade ago), has become extremely divisive in this nation. Undoubtedly, along with the so-called "War on Terror" (specifically its Iraqi phase), the issue will continue to be a dominant one until we reach the November 2008 Presidential/Congressional election.

The questions I've wrestled with regarding the immigration issue are, "What should my opinion be?" and "What should we as the Church do about this issue?"

There is no official doctrine regarding this issue in The United Methodist Church, nor should there be. There are a few resolutions (118, 119, 265, 266, 302) in our Book of Resolutions which deal with the issue, though these will likely be amended and broadened at General Conference 2008. Additionally, while these reflect the official position of the Church, United Methodists are not bound to support these opinions; they are not doctrinal standards to which we must adhere.

The Bible contains numerous passages about showing mercy to the alien or "sojourner" in our midst. Certainly, the Church is bound by these admonitions. And, when laws are unjust, civil disobedience is a viable option and, at times, a responsibility; God's expectations trump any expectations from the State. Many Americans also make it relatively easy for illegal immigrants to enter the United States, by indiscriminately offering jobs and aid. 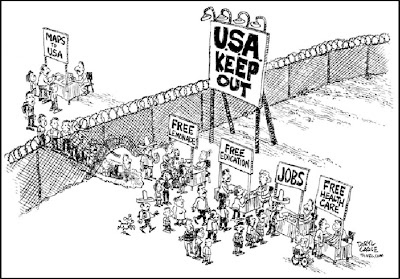 At the same time, there are legal means for people to enter the United States, and those who break the law should not be favored over those who are attempting to obey the law. That's entirely unjust.

So, here's where I am, with recognition that my position is prayerfully fluid and may change completely tomorrow...

* The Church is not an American institution; Christians are first and foremost disciples of Jesus Christ and citizens of his Kingdom, and only secondarily citizens of any secular state. Our ultimate allegiance belongs to Jesus, not to any worldly nation. If the demands of discipleship conflict with American interests, faith must come first.

* I believe the Church has the sacred right to offer sanctuary to anyone who asks for it, whether that person be an illegal immigrant, an accused child molester, an escaped murderer, or Osama Bin Laden. If nothing else, it gives us the opportunity to defuse a potentially explosive situation, seek justice as well as mercy, and provide a witness for Christ to all involved.

* The current debate has displayed ugly inferences of racism from every side; the Church needs to stand against racism and try to inspire language that does not drip of this venom.

* It's likely that immigration laws need to allow more immigrants entrance in a legal fashion and that their entry should be expedited, not caught up in "red tape" for great lengths of time.

* I'm not sure any border fence will work, and it's such an ugly symbol.

* American leaders should demand that Mexican leaders patrol their side of the border more diligently, and end practices in that nation which encourage illegal immigration. Additionally, companies which employ illegal immigrants in America should be severely penalized, perhaps to the point of being forced out of business. It seems to me that in many cases, these are the real criminals. If this temporarily hurts the American economy, so be it; there will be recovery, and probably a very quick recovery, as other companies move in to replace those damaged by illegal employment.

* Parents should not be separated from their children, as a general rule. On the other hand, any parent who knowingly commits a criminal act has already shown a willingness to endure separation, whether that crime is shoplifting, murder, or illegal immigration. It seems to me that Ms. Arellano made her decision some time ago. While I truly feel for her and her situation, and especially for her son, she knowingly and willingly committed a crime. Sadly, I'm not sure that Church officials - Bishops, pastors, and laity - did anything more than encourage her to do so. That's a bad witness on our part.

* We need to remember that most of us have roots in illegal immigration. many of our ancestors (such as those of my wife...and thus my children) came to the "new world" as explorers, colonists, and "pioneers", and were surely "illegal immigrants" in the eyes of native Americans.

More importantly, Abraham journeyed from Mesopotamia to the "promised land", whether the inhabitants wanted him there or not; the Hebrews, after the exodus from Egypt, entered Palestine much to the chagrin of the Canaanites. If not for these "illegal immigrants", our faith history would be very different. And, lest we forget, God sanctioned and at times even commanded these actions.

Given this, the Church needs to find a way to welcome the alien, show mercy, and work for more open immigration policies in America while also strongly encouraging adherence to the law. Should a situation arise again such as the sad case of the Arellano family, we should find a way to offer sanctuary while doing all we can do to find a legal and just resolution. Perhaps those involved did their best, but my impression has been that they seemed tied more to political partisanship than to any sense of real resolution.

Keith...well thought out, coherent and articulate.

You are correct Ms. Arellano has been deported and is now in Tijuana without her son. What a lot of people don't want to hear is that she had already been deported once before and returned illegally. She got back into the country by using false documents and someone else's social security number.

Now, I too, feel sorry for this woman and mostly for her child. She was arrested after attending several pro-immigration rallies that were orchestrated for political ends. She has been used and her child has become the pawn of politically motivated persons, some of which are United Methodists.

As a compassionate conservative, I believe that she and her child should have been allowed to stay in the country. But the fact is that her interests became political and she allowed herself to become separated from her child.

The racism issue is to me a non starter. We have allowed illegal immigrants into this country on a regular basis for the last 20 years. Reagan even granted them amnesty in the 80's.

But the pro-immigration lobby in the church continues to the play the race card and use hateful rhetoric to pursue their agenda. A bishop recently compared those against open borders to Nazis.

I am with you. Sensible immigration reform is just and necessary. We need something in between exportation and total amnesty.

Your post was coherent and insightful...thank you for that. It's nice to read from a level head on the topic.

I've only ever thought about the issue in a strictly secular sense (even wrote a paper on it in school a year or two ago), so now you've got me thinking about it in a Christian sense which is good. So thanks!

I believe the Church has the sacred right to offer sanctuary to anyone who asks for it, whether that person be an illegal immigrant, an accused child molester, an escaped murderer, or Osama Bin Laden. If nothing else, it gives us the opportunity to defuse a potentially explosive situation, seek justice as well as mercy, and provide a witness for Christ to all involved.

Does the state have a responsibility to respect that sanctuary?

I'd like to think that the state would respect it, and that they would try and work on a peaceful extraction, but my understanding is that there is no law in America which binds the state to respecting the notion of sanctuary. I could be wrong.

My primary concern is for the Church, and what we might be willing to offer and even to risk.

It's likely that immigration laws need to allow more immigrants entrance in a legal fashion and that their entry should be expedited, not caught up in "red tape" for great lengths of time.

There is a member of our congregation from Belgium whose legal immigration process cost thousands of dollars and years of time; it actually made him physically ill.

Let us say that a mosque grants sanctuary for a man who has honor-killed his daughter. Should the state respect it? Should Christians respect it?

Keith, Mexico has no motive for policing its northern border. It is far better for them to blame America for their poverty than fix their own corruption. A significant portion of the Mexican ecconomy is based on illegal immigrants sending back money. If that were to stop, Mexico would crumble.

One other note regarding your comment, "We need to remember that most of us have roots in illegal immigration. many of our ancestors (such as those of my wife...and thus my children) came to the "new world" as explorers, colonists, and "pioneers", and were surely "illegal immigrants" in the eyes of native Americans."

Keith, as someone who loves history, I am dissapointed that you would make this connection. The two have no connection except the false imagery set-up in your cartoon.