What is there to say about the biggest news story this week?

Former Pittsburgh Pirate Barry Bonds hit the 756th home run of his career, making him baseball's all-time home run king. Regardless of how long his record stands (probably not for long, given the relative youth of Alex Rodriguez), he will surely go down in history as the greatest home run hitter of his era, as Henry Aaron and Babe Ruth were in their own respective eras.

I understand that the home run record is probably the most sacred record in all of sports, and that generations of ball players (and kids on playgrounds across America) defined their play in the light of Aaron and Ruth. Still, my comment on Bonds' achievement is this: big deal. 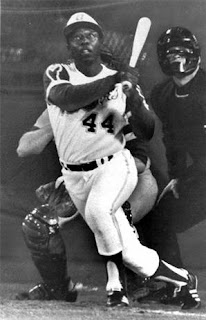 was not only a great athlete, he is a man filled with dignity and integrity. One of the most famous men on the planet, he nevertheless lives a relatively quiet, subdued life. He has been a committed husband and father, civil rights pioneer, and humanitarian. He has also been one of the finest ambassadors baseball has ever known. Henry Aaron gives children of all ages someone to admire for more than simply hitting a ball; he is an exceptional man.

Barry Bonds hits home runs. Famously temperamental and at times even mean, his career has been mired in controversy and scandal involving allegations of steroid use and perjury. Many believe that given the high probablity of steroid use, Bonds' achievement this week is the result of cheating, and should not be compared to the authentic achievements of Aaron and Ruth.

I should note that to date nothing has been definitively proven regarding the allegations against Bonds. The courts and baseball officials are still in the process of pursuing the charges, which may turn out to be completely false or at least unprovable. And, to be fair, Bonds' public persona may be very different from his private life; one hopes this is the case.

But, there's a lesson which remains for us to learn. Records and achievements at work are fine, whether home run records, Super Bowl rings, money earned, or Sunday worship numbers. But, at the end of the day, what really matters is what kind of person we are. How do we treat others? Our spouses? Our children? Sisters and brothers in Christ? Strangers? The "least of these"? Henry Aaron is beloved not simply for his home runs, but for the kind of man he is; Barry Bonds is derided, fairly or unfairly, for the same reason.

To celebrate achievements such as this is not necessarily a bad thing, but there are other aspects of our lives which are of far greater import, which matter more to God and to those whom we love.

So, today I'll make a nice chicken dinner for my wife and then take the family to a movie. That one extra hour working on my sermon and that one extra visit I could make and those extra moments I could spend planning can all wait. I'm off to help forge a real legacy.

I think the main reason that I say "big deal" about Bonds being the homerun king has more to do with his personality and "mean" attitude. Lance Armstrong has been accused for years for doping, but we view him as a hero and icon for cycling in America. His courage to battle through cancer, his attitude about life, and his gracious willingness to give back through his Foundation is why I celebrate him as an athlete, regardless of the allegations. So yeah, who cares. Henry Aaron is a hundred times more a man than Bonds could ever be.

As an adult who grew up in a house where my father was all about what happened at work to impress, and then let it all hang out at home. I would say, go for it, create a legacy. Your family will eulagize you someday for how you loved them, but my dad's work place won't be at his funeral giving kudos to him. It will be just me, I am all that's left, and I hardly know him after all these years. Sad.

I've said it before, I'll say it again. Character Matters! It may not mean a lot to many, but it does to me.

Thanks for the commentary. Keith, you are a great writer and I appreciate your thoughts.

Bonds & the record? Good for
Bonds, not so good for baseball.
Yawn.

Remember the "Little House" episode
where Charles goes away to make
furniture? His design gets stolen
even though he has worked and worked. He's been trying to leave
a legacy. He leaves the city and
returns home to his family. When
the wife and kids meet him at the
door he tells her, "Here is my
legacy." Years later his daugher
would write about him and his character. Food for thought.

"prove"??? A court of law is not the only place where truth can be known. It does not take a jurty or a rocket scientist to know how Bonds got so huge in such a short period of time.

I'm willing to extend grace until some official body...whether a court of the league...can determine what happened. He's probably guilty, but I'm happy to err on the side of grace.

Good comments. On the baseball stuff: Note that all the "great" home run hitters (including Aaron and Ruth) do and did very little home run hitting in the playoffs. Pitchers pitch for real during the playoffs. The rest of the season it pays to have hitters that people want to see hitting home runs. Watch the playoffs. You'll see that the top pitchers know how to shut Bonds down. (Just like they did Aaron and Ruth in their day.)

Keith...you are right. Bonds has been a poor ambassador for the game. He is no doubt a great talent, but he has given little back to the game.