Stop in the Name of Love

'A man was going down from Jerusalem to Jericho, and fell into the hands of robbers, who stripped him, beat him, and went away, leaving him half dead.

"But a Samaritan while traveling came near him; and when he saw him, he was moved with pity. He went to him and bandaged his wounds, having poured oil and wine on them. Then he put him on his own animal, brought him to an inn, and took care of him.
"The next day he took out two denarii, gave them to the innkeeper, and said, "Take care of him; and when I come back, I will repay you whatever more you spend."'

"Which of these three, do you think, was a neighbor to the man who fell into the hands of the robbers?'

One of the many troubling aspects of this parable, which is included in the lectionary for the upcoming Sunday, is that the two men who seemingly ignored the suffering traveler were both clergy.

It's easy for us to read this parable and feel some sense of compassion for the hurting man or a sense of admiration for the Samaritan. But as I read and re-read this parable, it occurs to me that as a pastor, I'm one of the guys who walked past the suffering man.

Now, I don't want to be too hard on the priest and the Levite. Commentators and theologians have given lots of legitimate reasons why they ignored the traveler, often having to do with ritual uncleanliness and the subsequent inability to minister effectively and offer atonement for the sins of the people. These don't seem like bad guys; they simply wanted to be as effective as possible in their current appointments.

In fact, it seems to me that they passed the traveler for a very utilitarian reason: they were simply too busy doing very important work to be bothered with one more thing. After all, it was a well traveled road, and, sooner or later, someone else was bound to help the poor guy in the ditch.

I'm reminded of a favorite episode from Jesus' life. On his way to Jerusalem to face, ultimately, the horrors of Golgotha, Jesus had a lot on his mind. All pastors are doing important work and feel the stress..."What about this project? How many people will it touch? Can we do better? Can we reach more?" (More of our preoccupation with programming, I suppose.) Jesus' mission was obviously even more important...the fate of all creation depended on what he did in Jerusalem, how faithful he was, how effective he was.

Yet, blind Bartimaeus, seeking healing, called to Jesus as he walked along the road, "Jesus, Son of David, have mercy on me!" The disciples told the blind man to be quiet, as Jesus was very busy, and simply couldn't be bothered with one more healing, one more blind man...one more suffering traveler in a ditch. 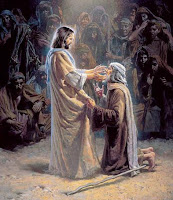 we read in Mark 10:49 my two favorite words in Scripture..."Jesus stopped."

Busy Jesus wasn't too busy for one more healing, one more blind man, one more suffering traveler in a ditch.

How often have I failed to heed the voice of the one in need, because I have been so busy doing good things, too focused on big projects and important events, too distracted by the work of ministry that I fail to live the reason for ministry?

I fear that I'm guilty, far too often. John Wesley's words to distracted and failed clergy cut deeply, "O house of Levi and of Aaron, is not the day coming, when the virtues of heathens and Samaritans will rise up in judgment against you?"

So, I need reminded that I am not only called to be an effective leader and faithful pastor, but also a good neighbor, not failing to stop to help one hurting soul, even if it throws off my schedule and sets my day on a very different course. After all, at whatever destination, whenever I finally arrive, Jesus is waiting for me there.
at 1:46 PM

First, good to have you back Keith.
Second, I have often wondered what was going on in the mind of the man who was left to die? I wonder how his life had changed? I wonder what he thought of the "church" after this event?

Thanks for the good reflection, Keith.

Personally, I have always simply assumed that the priest and Levite were Presbyterian clergy, then gleefully let myself off the hook!

Wow, throwin the heater right out of the Bull Pen! Welcome home and great reflection.

I would stop only if there was a band of photo journalists catching the entire thing, so that it can be featured in the PPG~ That said, I hang my heavy head and heart, and admit to that same sin. Thanks for that reminder giving me a chance to find God's grace just in the nick of time!

Welcome home, the picture of your son in the car, reminded me of Greg as a child, pouting on our vacations. hehe

He looks the same at accountability group talking about how Tracy won't let him eat in the family room.

Excellent post! It's interesting too that in the text, it says that the priest and the levite pass by "on the other side" of the road...indicating that they didn't even want to get close enough to the man to really see what was wrong with him. That would involve a risk that they obviously didn't want to take. How often do we not only fail to offer help to others, but fail to even get close enough to them to really understand the kind of help they need?

Good Post...ministry is about rolling up one's sleeves and changing lives one heart at a time.

As a female who once lived under subjugation of the Church in marriage, I was reminded of feeling much like the beaten man left and ignored on the side of the road. Clergy all around me, and yet I could not get a clear garden word about the interpretation of the female free of contradiction and hypocrisy in God. All I got was just submit, and it was to a situation which proved detriment in my life, certainly not of a blessing. Yes God will keep you, but that God will keep you does not mean that you are supposed to be there.

I think the day will come upon His Return when he will say, who did you really say I was to her?

I can assure you from years of pain and trauma from my own experiences, the real message of the Church to the female struggling with such issues is not that he is in fact their God, but that he is a tyrant as a god who doesn't even have the decency to love his children equally or to foresee the needs of a future female. That he even as God, is content to leave her destitute with a mere man charged by God to lord over her, and given such authority in marriage whether he is really living righteously or not. But I thought God was a jealous God and that a fallen, arrogant Adam lodging accusation only was a man created from the "dust?"

I now know better of God but it is only a result of His personal work in my life despite that of the Church, yet many are simply lost, or even as I almost was, they don't even come to Him at all. Often even if they do, they exist undetected, smiling and clapping but thinking..."ain't no way"...yet all you hear her speak is "Praise the Lord" and "Hallelujah!"

How much of the Hebrew do you employ in your full interpretation of the garden word, specifically how do you discern Genesis 2:23? Who is the man called an "Adam" in the Hebrew by God now seeking to be in calling himself now "Man?" What also does it mean that he not only rejected his own God-given name but suppressed the name of the female as well, calling her now "Woman" and not "Eve?"

My point is, even as this man was in drawing what otherwise may have been a last breath, if I or my gender kind am to suffer subjugation by the Church then the Church could at least demonstrate sound knowledge in lining up and even proving the truth of their tradition according to the Hebrew of this word.

Otherwise, I am just a beaten, robbed and bloody female abandoned by the side of the road watching clergy walk by me every day, most of the time clinging to tradition and not even bothering to glance my way with a second thought.

Yes Keith, this is what you get from the ministry of "The Real Skinny on Eve!" I seek truth about the garden word and I will try you.

I love the brothers, but I don't mince this word as I see it and yet I am always open to hearing what others have to say. I even crave it as what matters most is that we rid ourselves and the Church of a female in the precarious position of constantly having need to negotiate and have recognized the full value of her creation, mind, life and call in God.

It either is or it isn't, but if it isn't then prove it according to the word and not the tradition. That's all I want. (Honestly, to know me is to love me...really! (lol)).