Bergman was a Swedish film director and winner of several Academy Awards, including one for Lifetime Achievement. He is generally considered to be one of the all-time greatest filmmakers. The son of a Lutheran pastor, Bergman claimed to have later lost his own faith. Nevertheless, his works are masterful morality plays dealing with theology and psychology at extraordinarily deep levels. There was no "theology lite" in Bergman's films; the characters struggled honestly and painfully with real existential problems and significant questions of faith. 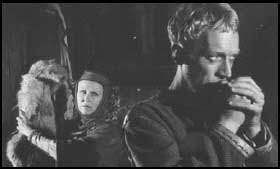 favorite Bergman film, and the one which introduced me to this master artist, is The Virgin Spring. Released in 1960 and starring Max Von Sydow, it won an Oscar for Best Foreign Language Film. It is set in medieval Sweden, and deals not only with the struggle between paganism and Christianity, but, eventually, with powerful ideas such as justice, revenge, and the real meaning of Christian faith. The story (and the emotional rollercoaster of the characters) takes the viewer to radically unexpected places. In this truly exceptional movie, Von Sydow struggles with his own faith, and the torment and agony he displays are extremely uncomfortable to watch; they're real. It's a film which will challenge your faith and cause you to ponder some very weighty concepts.

If you aren't familiar with Bergman's work or with The Virgin Spring, I urge you to do yourself a favor and order this fine movie from Netflix or your local library; my guess is that it's hard to find in most video stores. It will definitely be worth your effort.

You are very ecclectic and wello-rounded.