The Steelers report to training camp in Latrobe, PA next Monday, so it's time to start focusing on the glories of the NFL once again.

To start off the season, I'm ranking the ten best quarterbacks currently playing in the NFL.

10 - Vince Young, Tennessee Titans...so much potential, so much fun to watch, he made a bad team good

9 - Philip Rivers, San Diego Chargers...what a season he had with the great Chargers team; I'm not sure he (or they) will come close this season 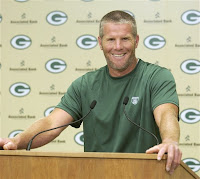 - Brett Favre, Green Bay Packers (a lock for the Hall of Fame)...at one time the best in the game and probably more fun to watch than any other QB in NFL history, the old man's bringing it on for one more season...his farewell tour won't be pretty, but, being maybe the toughest athlete on the planet, it will be great to watch

6 - Marc Bulger, St. Louis Rams...efficient, flying under the radar in the wake of teams and QBs with more flash

5 - Carson Palmer, Cincinnati Bengals...a great passer and tough leader, but he'll have to win some meaningful games (i.e., playoffs) to make me into a true believer

4 - Ben Roethlisberger, Pittsburgh Steelers...I'm thinkin' he'll bounce back into superstar form, even if the Steelers can't overtake powerhouse teams like the Patriots

3 - Drew Brees, New Orleans Saints...magnificent...he may lead the Saints to an NFC title

2 - Tom Brady, New England Patriots (a lock for the Hall of Fame)...the most successful QB of the 21st century (so far), and leader of the team of the decade...he's the favorite to win the Super Bowl in the upcoming season, which would tie him with Bradshaw and Montana 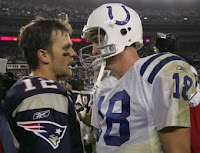 ...two more Super Bowls puts him in a class by himself

1 - Peyton Manning, Indianapolis Colts (a lock for the Hall of Fame)...he finally got the monkey off his back by winning a Super Bowl; unquestionably one of the all-time greats and certainly the best passer in the game today, I typically give Brady the edge over Manning, but Manning beat Brady's Patriots twice last season and, of course, won the game that really matters...Manning's the best QB currently playing in the NFL

can not wait till next Monday. Corben became a Steeler fan so we could spend time together on Sunday afternoons on Sundays and Pearl has been one from the start she came home from the hospital in a Steeler outfit in time to see the Steelers play the Browns

I wanted to congratulate you on your wisdom and clear-thinking.

Did I mention I live in Indiana?

I was a Steelers fan as a child (when the Colts were still in Baltimore) and still cheer for them if they are not playing against the best quarterback in the NFL.

It's all about the intangibles, Matt. Big Ben is that special kind of player who elevates the rest of the team, making OK players do great things. People like Elway, Montana, and Brady are/were masters at that; Big Ben is not (yet) in their league, but he has those same skills. When he was "on", he was excellent. If he can bounce back from last season's problems, he's that good.

Of course, the other things is that we have to give some credit to the guys who have won Super Bowls, which is how you measure greatness in the NFL. Manning finally did it, Brady is the modern god of Super Bowls, and Big Ben won 2 years ago. Give him some love, brother!

Something tells me Rex Grossman is coming out of his shell this year.

I thin Chicago needs a new, more consistent QB if they want to win the Super Bowl.

Can't wait for the season to
begin.

Keith...sorry...I'm bot buying into the Michael Vick experience. Look at completion percentage and you will see he is very weak. Running around might be fun to watch, but it won't help you win in todays NFL.

This would have been a make-or-break season for Vick: produce and go deep in the playoffs, or bust. Now, it seems like his off-the-field issues will destroy his career.

Brett Favre all the way!!! It will be an ugly year, but it will be a wild ride!

You know Kate loves Tom Brady, but he is a bit too pretty, no?

Besides, no one will watch football now that Beckham is here!