Walsh served as Head Coach for the San Francisco 49ers in the 1980s. During 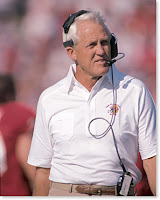 that time, he led the 49ers...once the laughingstock of the NFL...to 3 Super Bowl championships. More than that, he is one of those rare people to have really changed the way football is played, by developing what is commonly known as the "West Coast Offense", a system which focuses on quick, short passes to move the ball down the field before a defense has time to react. His system has been adapted by many, many other coaches, and is used at every level of play. His disciples and their own apprentices have dominated NFL coaching positions for 20 years. He is also largely responsible for recognizing and developing Hall of Fame talent such as Ronnie Lott, Joe Montana, Jerry Rice, and Steve Young (my favorite Mormon). Walsh was himself inducted into the Hall of Fame in 1993.

The passing of Walsh begs the question as to his place among the greats. While Chuck Noll, for instance, wasn't the great innovator that Walsh was, Noll won more Super Bowls in a shorter span of time, dominating his era like no coach since. Tom Landry and Don Shula had great success over long periods of time, but won fewer Super Bowls than Noll or Walsh. There are many other great names to consider, including Bill Belichick, Paul Brown, Joe Gibbs, George Halas, Vince Lombardi, and Bill Parcells, to name a few.

Perhaps in a future post, I'll sort this out. But, for now, I'm thanking God for the fun that Bill Walsh brought to this world, and I pray that, while I prefer a running game and "hard hitting defense" focus, the fun will continue.

Walsh has to be listed in the top
five, IMO. He cut his career short
by retiring too soon. He later
regretted doing so. Now maybe they
will call the "West Coast Offense"
the "Walsh Offense."

BTW, he should be listed as one of
the best because: 3 Super Bowls
& innovation. He changed the game.

FWIW: I just finished Tony Dungy's
book. It was a fun, easy read. I'm thankful he's in the NFL. What
a great guy.

Greg - I was never too up on Tom Snyder...saw that he passed but never watched him much. Hopefully, no one I admire will die in the next few days!

Clay - You may be right regarding Bill Walsh's place in history. He is HUGELY important, no question. He's certainly one of the all-time greats. Noll wasn't the innovator that Walsh was, but it's hard to argue with such success and dominance...4 Super Bowls in 6 years is almost unthinkable by today's standards (though the Patriots are something else).

One of the best things about Walsh was his willingness to draft a little known receiver from a division 1-AA school. That was, of course, Jerry Rice. He got the most out of his players...Roger Craig, Brent Jones and taught Steve Young how to play the position.

You are spot on regarding the Pats.
They just might be the team to
beat this year.