There has been a good deal of discussion on the social networks and in the media recently about bullying. The conversation, while appearing sporadically in the last few years after various incidents, really took off after the tragic suicide of a young man at Rutgers University, whose homosexual behavior was revealed by his roommate via an inappropriate video of the victim engaging in the behavior.

"...a form of abuse. It comprises repeated acts over time that involves a real or perceived imbalance of power with the more powerful individual or group abusing those who are less powerful. The power imbalance may be social power and/or physical power."

Without question, bullying is a terrible "form of abuse", and can scar people for life. People are bullied for all sorts of things, at many times in life. It's never good, and it hurts.

As a child and well into my teenage years, I was a victim of bullying. I was generally much smaller than most of my classmates, and 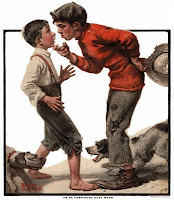 was, in many ways, very, very different from most of them; I wasn't athletic in any way and preferred music and reading to physical competition. I was shy and extremely introverted; I was socially awkward and uncomfortable around strangers, and had a real problem with self-esteem. As a result, I was often a target of both physical and verbal abuse, and it hurt deeply. I often felt isolated and alone. My sixth grade year was particularly painful. In so many ways, I still see myself as that bullied young boy who doesn't quite "fit in" (feel free to psychoanalyze now!).

Bullying is real, and though it likely has been around as long as humanity itself, it continues to be a real issue for people of all ages.

It is a real tragedy that the bullying of the Rutgers student resulted in his suicide. We should not take this death lightly, and if this event can be used to jumpstart real conversation, then perhaps this young man's life will be honored in some way.

But I have serious concerns about how the conversation has been going.

First, the primary tragedy is not that a closeted homosexual was cruelly "outed"; it is that a young man is dead. Reducing any person to their sexual choices or opinions masks the worth of each human life. This young man

was of infinite value in the Kingdom of God, and his untimely death is a catastrophe for all of us, for many, many reasons. My fear is that we incorrectly see this as a "gay issue" and not as a "human issue", which is far broader and even more painful. My friend Joe Miller boldly discusses this issue on his own blog; it's worth a look.

Second, I have been somewhat taken aback by the way many United Methodist Christians have approached this conversation. Too many United Methodists seem to have embraced this death as a "gay issue" (I mean no disrespect by the use of this phrase; it just seems the most concise rendering). This bodes badly for us all. Aside from the fact that it looks as if many of us may have missed the dehumanization of the victim in reducing this to a "gay issue", we may also be failing many people who still suffer from bullying, and others who are engaged in sexual behaviors which the Church does not condone.

The United Methodist Church, for good or ill, has a position on human sexuality. While it may not be a perfect statement, it nevertheless communicates to the world who we are and how we as a Church view these issues. While the entire statement from our Book of Discipline can be viewed here, pertinent pieces for this post include:

"We deplore all forms of the commercialization and exploitation of sex, with their consequent cheapening and degradation of human personality...We insist that all persons, regardless of age, gender, marital status, or sexual orientation, are entitled to have their human and civil rights ensured. We recognize the continuing need for full, positive, age-appropriate and factual sex education opportunities for children, young people, and adults. The Church offers a unique opportunity to give quality guidance and education in this area.

"Homosexual persons no less than heterosexual persons are individuals of sacred worth. All persons need the ministry and guidance of the church in their struggles for human fulfillment, as well as the spiritual and emotional care of a fellowship that enables reconciling relationships with God, with others, and with self. The United Methodist Church does not condone the practice of homosexuality and considers this practice incompatible with Christian teaching. We affirm that God's grace is available to all, and we will seek to live together in Christian community. We implore families and churches not to reject or condemn lesbian and gay members and friends. We commit ourselves to be in ministry for and with all persons."

An additional statement (which can be read in full here) makes clear that United Methodists are to stand against practices of fear or prejudice toward those engaged in homosexual behavior.

United Methodists (particularly clergy) need to live into these statements as best they can. This means, in my view, standing against the bullying of persons engaged in homosexual behaviors. These are persons to be loved, not feared or harmed.

Additionally, however, we are to help folks engaged in all kinds of behaviors - sexual and otherwise - to recognize that they can know redemption and deliverance in Jesus Christ. I'm

reminded of something shared by Bishop William Willimon during a visit to Pittsburgh Theological Seminary in 2007, in which he shared with those present some words we will never hear from God: "I love you just the way you are; promise me you'll never change." While we are to unequivocally stand against the bullying of persons who are targeted because of their sexual choices, this does not mean we should simply affirm their choices or behaviors. We should show them through love that Jesus has a better way for us. To do otherwise is to not only fail to live into our United Methodist covenant, but more importantly to miss an opportunity to share the unbounded grace of a merciful God who desires the best for each of us.

It is my sincere prayer that as the conversation in social media and the media continues regarding this subject, that we who are blessed to call ourselves United Methodist Christians will do our best to fully communicate the tragedy and hope surrounding the sad death of the Rutgers student and the blight that is bullying.