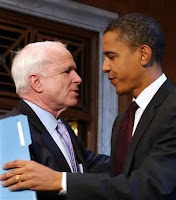 the Olympics behind us, America will begin now to turn seriously to the upcoming presidential election. The Democrat convention begins tonight. I have posted previously (here and here) about the need to vote first and foremost based on a candidate's personal character. In my view, both John McCain and Barack Obama seem to be decent fellows. This isn't to suggest that these men have never made mistakes or errors in judgment, and it certainly doesn't mean that I agree with all of their stated positions or goals...but, both senators seem to be OK guys.

I've been disturbed by some elements of the campaigns. It bothered and confused me, for example, when Hillary Clinton attacked Barack Obama for his "lack of experience". It disturbed me that she had only four more years of experience than Obama, and, of course, neither Clinton nor Obama possesses experience comparable to that of John McCain. Abraham Lincoln and Theodore Roosevelt had very little experience, yet both are among history's finest leaders. If John McCain focuses on this aspect of the election, his campaign will go down in flames as did Hillary Clinton's campaign.

Experience isn't nearly as important as personal character. In addition, the ability to raise up talented people to serve and lead is far more important than how many years one has served in the U.S. Congress or as a state governor. In my opinion, these gifts are areas worthy of our focus.

Without question, prayer needs to begin regarding the decisions Americans will make in a little over two months.

Heavenly Father, gracious lord of all creation, you rule and judge all nations; you scatter the arrogant of mind and heart; you cast down rulers from their thrones and raise up the lowly.

This November, Americans elect those who will serve in government, and the voices that call to follow one path or another are often confusing; the signs of these times that must be discerned are tragic and unjust; the culture of death that afflicts all humankind is powerful.

Open all eyes to see your reign in history; open all hearts to share your love with people; open all ears to hear the cry of the widow, the orphan, and the stranger among us. In the midst of chaos, enable your Church to be your obedient people.

Send your Holy Spirit upon the people of this land. Help Americans to make wise and prudent decisions. Increase faith and hope. Empower your Church to live the Gospel she professes, even when this means alienation and criticism from the world. Guide your Church on to perfection, through Jesus Christ our Lord. Amen.
- adapted from justpeace.org

At the Saddleback Civil Forum, Barak Obama was asked the question by Rick Warren: When does a baby have human rights? Obama's answer was disturbing. "That's above my pay grade." McCain answered quickly that these rights begin at conception. The fact that Obama really wouldn't state his opinion when he is clearly pro choice is to waffle. It makes me think twice about his character.

I don't think Obama is waffling. The opinion of most pro-choice supporters is that the government should not be in the business of making these decisions. So in saying "That's above my pay grade," he is not waffling, but staying true to that position.

It's easy to take a statement we disagree with and portray it in the worst possible light, but I don't think that helps us make an informed voting decision.

I really enjoyed watching the forum (videos and transcripts can be seen here).

I feel like a learned a lot about both men. I am still on the fence, but like McCain much more. Honestly, the bigger factor for me is that I think since the Democrats will win big in the house ad senate, I think a Republican in office would be a bit better than both branches controlled by one political party.

What about you Keith? Did it influence you vote for the fall.

Oh BTW Keith. You should consider writing a link in this synchrblog chain on peace. I think you would offer a good perspective on this topic.

Joe...The forum was OK; I'm not sure whether or not it swayed my vote. McCain did better than Obama that night, which surprised me. I agree with you regarding hopes for a legislative/executive split. The spectacle in the Denver stadium was MAGNIFICENT theater, but short on details; I'd be interested in hearing how Obama plans on accomplishing some of his goals.