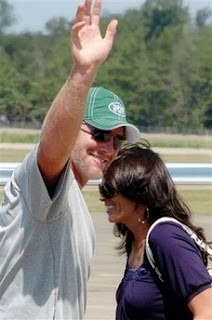 a shock to wake up this morning and discover that Brett Favre is now a New York Jet. Can this soon-to-be 39 year old quarterback handle these great new expectations?

Favre is perhaps the most beloved player in today's NFL (unless you live in Illinois or Minnesota). For those of us too young to remember the glory years of Vince Lombardi, Ray Nitschke, and Bart Starr, Favre is synonomous with the Green Bay Packers. In a franchise of countless Hall of Famers, he became the greatest Packer of all. Now, to see him in New York City, leading one of the most hapless teams in the league, is going to be very, very strange.

As a nation, we watched Brett Favre emerge in the mid-1990s as a very special young player. Built more like a tight end than a quarterback, he played with a certain joie de vivre that was contagious; he had fun, broke rules and took risks, playing the game like it hadn't been played in 50 years. 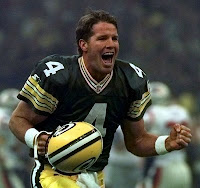 It always looked as if he were playing a pick up game in his backyard with his buddies. It was a true football pleasure to see the young "gunslinger" lead the veteran Pack to a Super Bowl victory in 1997. He quickly became the only three time MVP in NFL history.

Then, something else happened. While the eyes of fandom turned to John Elway's triumphant finale and the emergence of two legends-in-the-making named Brady and Manning, Brett Favre aged. The young gunslinger transformed into a grizzled old veteran, the oldest player in Wisconsin, whose wild style of play resulted in all-time records for starts, touchdowns, yards...and interceptions. He became more than an legend; Brett Favre is an icon, like few other football stars in recent history.

He started out as the exciting young player with a contagious passion; he turned into John McClane fighting the baddies and trying to survive in Nakatomi Plaza. It was sometimes painful to watch, but you had to watch, and were ultimately thankful that you did. A tearful retirement was a sad day for all of America. It staggers the imagination that the Packers wouldn't or couldn't welcome him back into the Lambeau fold. 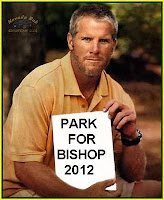 he'll finish his career under the bright lights of the Big Apple. Has sixteen years in the NFL's smallest market prepared Favre for the scrutiny of the largest media market on the planet?

In Pittsburgh, we take Ben Roethlisberger and Hines Ward very seriously. We can't be bothered with, say, Carson Palmer or Randy Moss. In San Diego, it's all about LaDainian Tomlinson; they couldn't care less about Tony Romo.

But Brett Favre belongs to all of us. We'd all love to have him on our team; at least, we'd like to sit with him, have a beer, and watch a game. Our hearts went out to him when he lost his father, and then turned out maybe the greatest performance in the history of Monday Night Football. We prayed during his wife's bout with cancer. We sat on the edges of our seats as he struggled with an addiction to prescribed painkillers, and we marveled as he became the world's toughest athlete, starting a record 253 consecutive games, often in serious physical agony.

New York City is exactly a thousand miles from Green Bay. It will be bizarre to watch Brett Favre play in a New York Jets uniform. But, he didn't leave his fans a thousand miles away; his fans are anywhere and everywhere people love the game of football. If the Steelers aren't playing in Tampa in February, what a joy it would be for every football fan to see Brett Favre under center.