JUMC: Year One (or "Lessons from Frank Miller's Batman")

In 1988, while attending Edinboro University (where I met both my future wife Robyn and my longtime friend Dayton), I went to Pittsburgh for a weekend to visit my friend Marie Waun (whose mother was, ironically enough given my current vocation, a United Methodist pastor) and to watch with Marie the premiere of the U2 concert film Rattle and Hum. Great movie for a U2 fan...good weekend overall.

Before catching the Greyhound bus for the trip back to Edinboro, I stopped at Eide's Entertainment to purchase something to read on the long trip back to school. 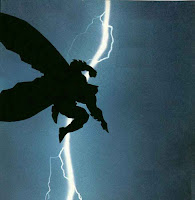 I had heard a great deal about Frank Miller's The Dark Knight Returns, and was glad to finally have a chance to read this "graphic novel", which had been turning the world of comic books on its ear. I devoured the book on the bus ride, finishing it just as the vehicle pulled into the university lot.

It is not overstating the truth to state that this book changed my life. There are a lot of reasons for this. DKR introduced me to postmodern thinking, to new ways of storytelling, to the idea of "metanarrative" (which has become so important in my theology), and, indirectly, to "film noir", to semiotics, and to host of other ideas. It has been hugely influential; I can hardly imagine American Psycho, Fight Club, or Quentin Tarantino without Miller's DKR (OK, that may be overstating a bit...it's likely, however, that all those creative people were drinking water from the same well as Frank Miller). Beyond all that, it's just a really good story, told exceptionally well.

I was interested, therefore, in Miller's "prequel", called Batman: Year One, which, obviously, told the story of how Batman came to be (as opposed to DKR, which deals with his final days).

In both DKR and Year One, Miller is a patient storyteller who writes about a very patient (though extremely passionate) man. Bruce Wayne doesn't simply decide to become a vigilante and immediately engage criminals in fisticuffs;

he observes, prepares, learns "the lay of the land", determines the identities of the "power players", and makes proper connections, beginning to build the appropriate relationships he'll need to accomplish his crime-fighting mission.

Not a bad model. That's pretty much what I've been trying to do, and, now, my first year at JUMC is nearly complete. I've spent "year one" trying to observe, prepare, learn "the lay of the land", determine the identities of the "power players", and make proper connections, beginning to build the appropriate relationships I'll need to lead JUMC in accomplishing our disciple-making mission.

I've discovered a lot about the congregation, her history, the area in which God has placed us, and, surprisingly, myself.

Allow me to risk being a mite unorthodox for a moment. I've come to believe that perhaps the Church has it slightly wrong. Our Book of Discipline states that our mission is "to make disciples of Jesus Christ", but, properly speaking, it's the Spirit who makes disciples, not us. The best we can do is to faithfully allow ourselves to be used by the Spirit to do great things...large or small. 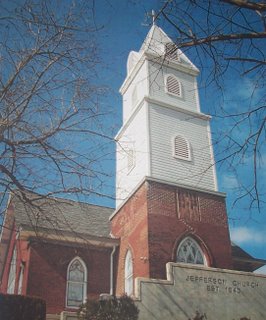 shouldn't get too caught up in programs or programming. Programs can be good, and can indeed point us to larger truths. But it seems to me that "programming" is so yesterday, so Baby Boomer; it's like placing the Adam West TV "Batman" into a post-DKR universe...he may catch a few bad guys, but he'll be largely ineffective in the bigger picture.

Instead of programming (which is entirely supported by the somewhat dated idea of "making disciples"), relationship-building is a far more authentic approach in this 21st century, richly complex, post-postmodern world. In Frank Miller's world, for instance, there are all kinds of programs, for all kinds of purposes, but there are precious few meaningful relationships, which, in Miller's apocalyptic approach, results in the fall of western civilization.

This brings me back to a ministry theme to which I often return...the idea of incarnational ministry. We need to go where the people are, not simply invite them to our building with our latest neato program. We need to eat lunch with them in their homes or their favorite restaurants, not just invite them to our latest potluck supper or spaghetti dinner. We need to get to know the people in our communities by name, so we can give an authentic "hello" in the grocery store...and by vehicle, so that we can wave knowingly when they drive past. Just as important, they need to know us, so they can respond without having to question our motivations. We don't build relationships to make more church members, but simply out of love.

At any rate, with the "year one" business out of the way, it's time for me to look beyond now, and begin to really allow the Spirit to transform our life together and our approach to ministry. Same bat-time, same bat-channel...but hopefully with more bat-wisdom.

Since you have covered DARK NIGHT and YEAR ONE, so well, I will not bore you and others with my own similar reactions to Miller's work.

But I will tell you that Neil Gaiman's Sandman stories back in the late 80s (particularly "Preludes and Nocturnes") were equally as influential in the development of my artistic and spiritual sensibilities. Having read comics all my life, I reacted to Sandman (much as I reacted to Miller's work) with a sense of wonderment. The art was challenging. The storytelling rich and multi-layered. The characters both cryptic and evocative.

Thanks for making the nifty connection between Miller's metanarrative and ministry in the postmodern world. And thanks for reminding us that comic narratives and metanarratives, far from being throwaway popular culture, are (as M. Night Shayamalan suggests) the hieroglyphics of our contemporary culture, "our last link to an ancient way of passing on history." (from Shyamalan's film "Unbreakable")

I'm resisting the urge to theologize all kinds of Batman imagery - the bat signal, the bat cave, masks ...

While you remain a Batman novice, your appreciation of these books is a good thing. DKR didn't really influence the writing of American Psycho, nor did it have any substantive influence on Tarantino (who says he didn't read it until after seeing the film adaption of Sin City), DKR and Year One had a HUGE impact on Tim Burton, who eventually put out both Batman films with Michael Keaton. Also claiming DKR as an influence is Stephen King. For another great Batman story, check out The Long Halloween, which is one of the best as far as establishing the mood of Batman's early years, the climate of Gotham City, and just a well-paced story. Also love the art...Tim Sale may draw the definitive Batman.

Keith...Although I have never been a big fan of comic books, I appreciate the impact they have had on art and culture. The point is that you are right on about relationships. Have you read Bill Hybel's "Just Walk Across The Room?" It is all about relationship based evangelism.

Although I have no idea what you're talking about, I did just get a message that the cave that we used to use for spelunking at Jumonville is now off limits. It is now declared as a "Bat Cave." I was under the impression that the Bat Cave was only during the winter months, but apperently it is now year long. Too bad too - I thought the cave was a great place to introduce kids at camp to Christ's light. Now we are relegated to the more commercial, Laurel Caverns this year.

Great thoughts! Have an awesome and blessed year two. Grace and Peace, John